For well over an hour in Lisbon Rangers illuminated the Stadium of Light. Alfredo Morelos had claimed his place in the history books and Steven Gerrard’s side stood on the cusp of a night to remember. Then, in the final 13 minutes, the lights went out and darkness fell.

A point in Lisbon can never be regarded as a bad result. On nights like these teams console themselves with the knowledge they would happily have taken a draw before kick-off. Yet who can dispute that Rangers should have left the Portuguese capital last night with all three?

The game should have been about Alfredo Morelos breaking a long-standing Ally McCoist record with his 22nd European goal in 37 appearances; his 84th Rangers goal in 154 appearances. 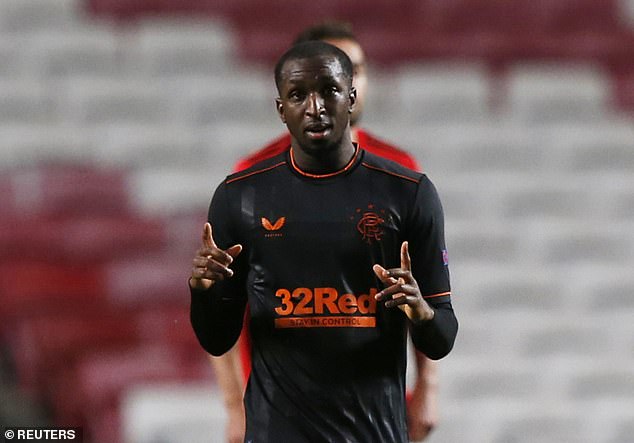 It should have finished in another bout of marvelling at that £50,000 spent on pinching Glenn Kamara from Dundee. It should have been a testimony to the evergreen brilliance of Steven Davis.

When Rafa Silva pulled one back for the ten men of Benfica after 77 minutes it felt like mere consolation. When substitute Darwin Nunez raced clear to equalise in the 91st minute it felt like an injustice.

In complete control of the game after a slick, courageous and composed display of attacking the narrative switched in those final minutes to their defending. The Ibrox side have been a tough nut to crack in recent weeks. Exposed in some shape or form for all three of Benfica’s goals, Swedish central defender Filip Helander had a poor night. 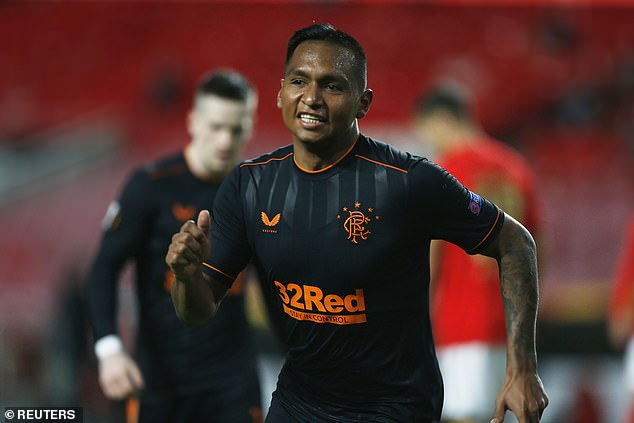 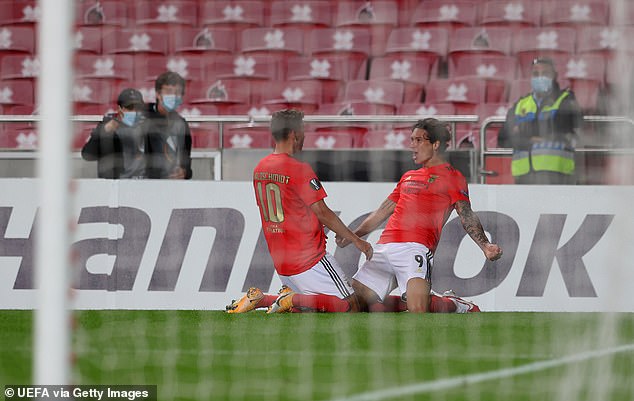 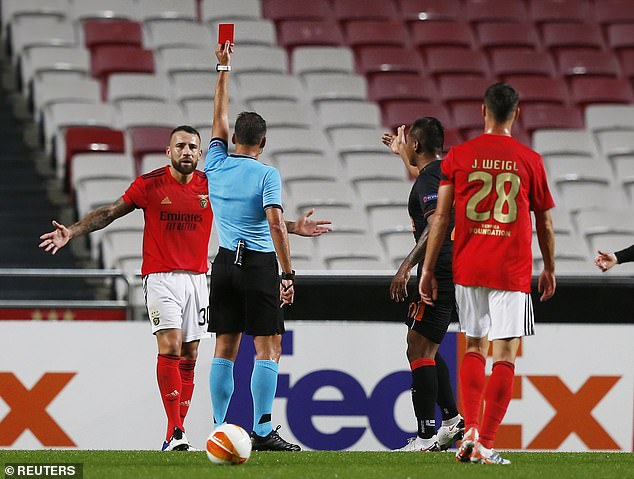 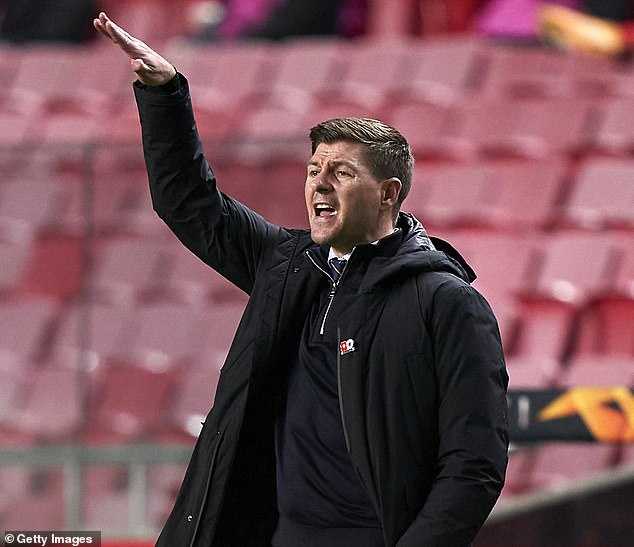 Everything is relative, of course. A point still leaves Gerrard’s team firmly in the running for the last 32 after three games. They are still unbeaten in their last 19 matches. They still haven’t lost in Portugal on their last 12 visits. And they still haven’t worked out how on earth they failed to win this after bouncing back from the loss of an awful goal after 61 seconds.

Weak defending from Helander presented attacker Rafa Silva with time and space to make for the byeline, fizzing cut back cannoning off the knee of the helpless Conor Goldson for an own goal and 1-0.

A disastrous start could have turned a whole lot worse. Benfica’s high press and rapid pace saw winger Pizzi lash wide from a lightning counter attack. In the opening 20 minutes the frown lines on the face of Steven Gerrard were growing deeper by the second.

Yet the game turned on its head in 19 minutes with a red card. Before kick-off BT Sport pundit and Ibrox icon Ally McCoist offered a prediction. If Rangers wanted some joy here the man to target was Benfica central defender Nicholas Otamendi. 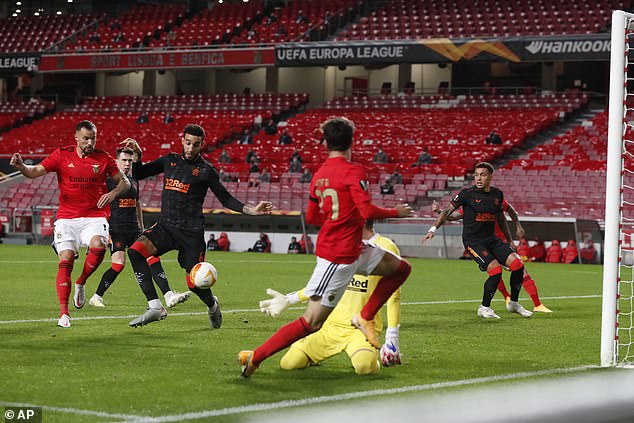 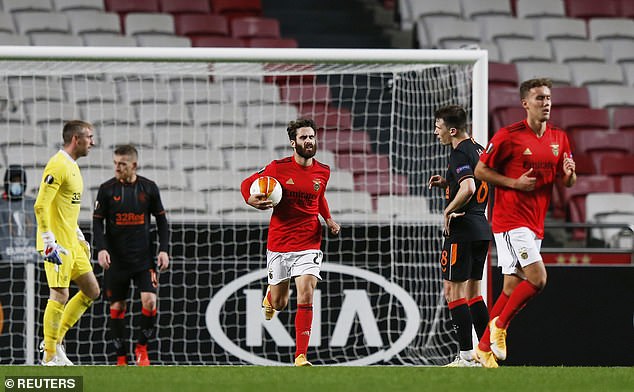 At Manchester City the Argentine was an accident-prone figure. And Rangers can be mightily glad that the gaffes followed him south from England to Portugal.

A raking Steven Davis pass from his own half prompted a slightly heavy first touch from Ryan Kent as he raced in behind. Cleverly cutting across his man the slightest touch from behind by Otamendi sent the Englishman sliding to the ground. A red card was produced and with 70 minutes to play, Mystic Ally was investing his money in a Euromillions ticket.

Around the same time heavy rain began tumbling from the Lisbon sky. The weather wasn’t the only thing on the turn.

Some teams adapt to a red card and adapt. The collapse of Benfica here was quite something.

Give Rangers their due. In recent years the character of the Ibrox side has been questioned time and again. Yet this season they look a different proposition. Once again here they took the game by the scruff of the neck and showed grit, character and no little finesse. Aided and abetted, it must be said, by five time title winning club captain Jardel replacing the Benfica dangerman Pizzi. 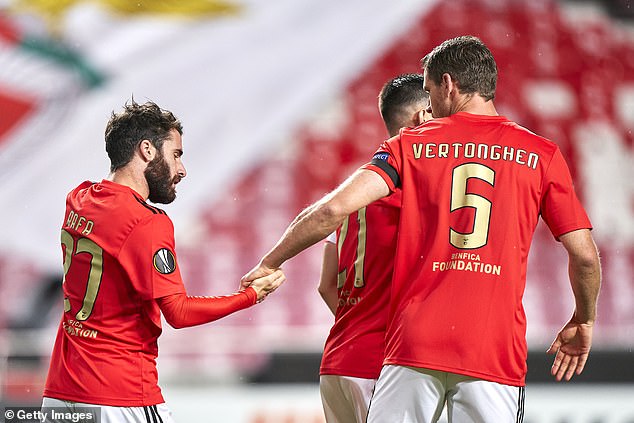 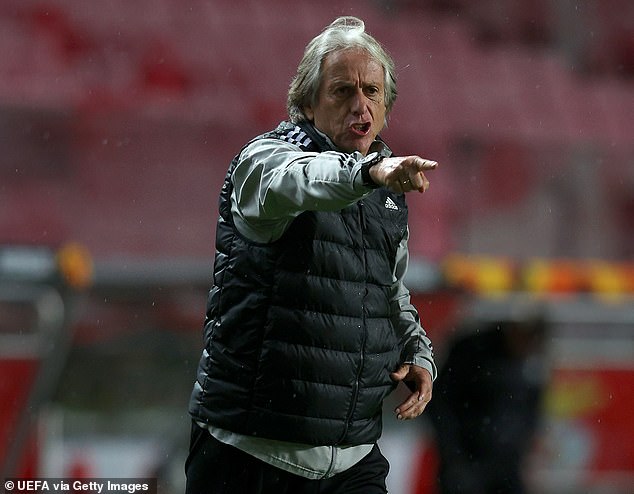 Jorge Jesus, the Benfica boss, was left infuriated after watching his team gift away their lead

The numerical advantage proved critical and took just four minutes to take effect. Rangers levelled with the second own goal of the match. A hugely influential figure, Steven Davis spent the night doing the right thing. His through ball created space for James Tavernier to run into, a ferocious cut back slashed into the net by Cupido Goncalves for 1-1.

The balance restored, Gerrard’s side grew in confidence, composure and control.

Remarkably, they took the lead inside two minutes. A fine team goal from a counter attack, a switch of play from Alfredo Morelos picked out Kamara in space 25 yards from goal.

If the first touch wasn’t great, the second and third were outstanding. A flashing shot low into the net from 20 yards nestled in the bottom corner of the net. From a ropey, faltering start Rangers were now 2-1 ahead.

The only regret in the end was the failure to add more goals in a game where the scoreline failed to reflect their superiority. Joe Aribo blew a wonderful chance for a third after 31 minutes, flashing a header wide of the far post from an inviting Borna Barisic cross. 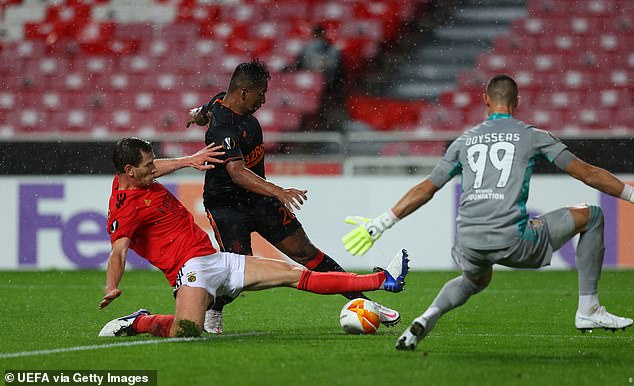 Benfica coach Jorge Jesus made a series of changes from half-time onwards. Yet until Benfica’s late rally it felt as if nothing he did could halt the slide. Visibly spooked by the red card for Otamendi Benfica’s unbeaten start to the season ended with a 3-0 defeat to Boavista on Monday night. The rot should have continued here.

Morelos became a record breaker six minutes into the second half with the easiest strike of his Ibrox career, a four yard tap in from a driven James Tavernier cross. Compared to Gerd Muller by Benfica’s coach before kick-off the Colombian is not everyone’s cup of tea. Yet his record in the Europa League is now inarguable, his all-round game here terrific. He was involved in everything.

The cushion cemented the dominance Rangers had on proceedings. Cutting Benfica to bits almost at will the score should have gone to 4-1 in the 63rd minute when slick interplay between Morelos, Ryan Jack and Kent ended in the winger clipping the outside of the post. A few inches the other side and the game was out of sight.

When Benfica pulled one back with 13 minutes to play a level of tension set in. It was another worrying lapse from Helander, going to ground too easily to allow substitute Darwin Nunez to cut the ball back for an easy tap in for Rafa Silva.

Creator of the second Darwin Nunez raced onto a through ball from Luca Waldschmidt to convert the equaliser in the first minute of added time.