He may have swapped League Two outfit Cambridge United for a move to Roma in one of the most intriguing transfer stories of the summer, but Mbunya Alemanji certainly isn’t getting carried away.

The teenage forward recently put pen to paper on a three-year contract with Roma, who acquired his signature despite not having seen him play in the flesh.

Cambridge will receive approximately £70,000 in compensation, and the 16-year-old will join up with Roma’s Under 17s side initially – starting off as a scholar for one year before turning professional.

But despite making the glamour move to Italy from League Two outfit Cambridge, Alemanji is keeping grounded.

‘It is a big move but I’m just trying to prove why I’m there,’ Alemanji told BBC Sport.

‘My friends have been saying to me: “Do you realise you’re at AS Roma?” I’m just trying to keep calm.’

Alemanji move to England at just three years old after being born in Germany, and he joined Cambridge at 13.

He played with the League Two side’s Under 16s and Under 18s before making the incredible move to Italy.

The 16-year-old’s agent then sent video reels of Alemanji to Roma’s interim sporting director Morgan de Sanctis earlier this year so that the club could get a taste of what he could offer them going forward. 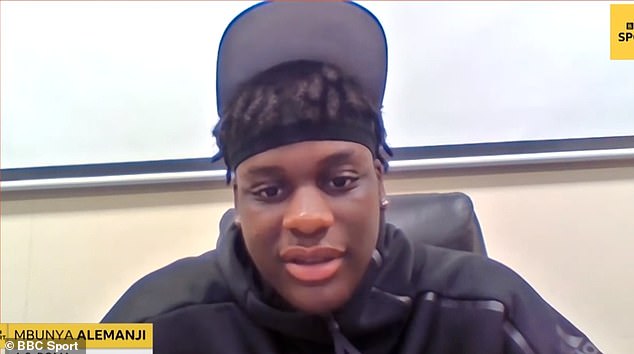 ‘It was during lockdown – my agent contacted me and said: “Roma are interested in you”,’ Alemanji further explained.

‘They are such a big team that I didn’t really think much of it. The next week he contacted me again and said you might have to travel to Rome in two weeks. I was like: “Wow.” It took longer for it to happen but I eventually signed.’

He has already been star-struck after bumping into former Spain, Barcelona and Chelsea winger Pedro – who joined the club on a free transfer recently.

Alemanji admitted to seeing Pedro at Roma’s training complex, where he will be staying, after undergoing coronavirus tests.