Real Madrid had taken the lead after just five minutes and it was the type of sweeping move that had been the undoing of Zinedine Zidane’s team in midweek against Shakhtar Donetsk.

Nacho moved the ball forward to Karim Benzema who played in Fede Valverde. The Uruguayan had pointed where he wanted the pass and he duly ran on to it and buried it past Neto. 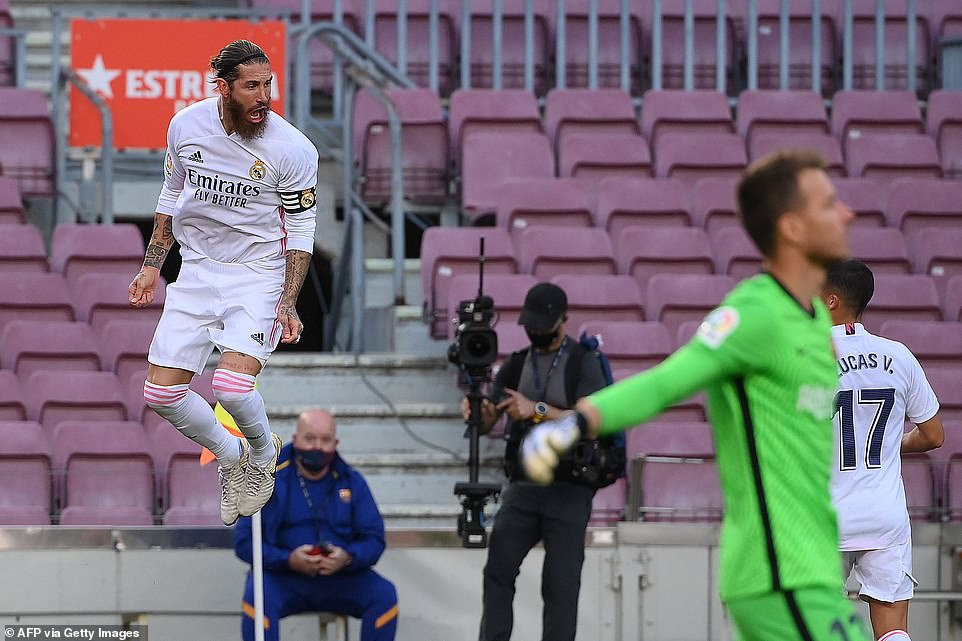 The Madrid skipper won a penalty before dispatching his spot-kick, as Real Madrid came out on top in the second half 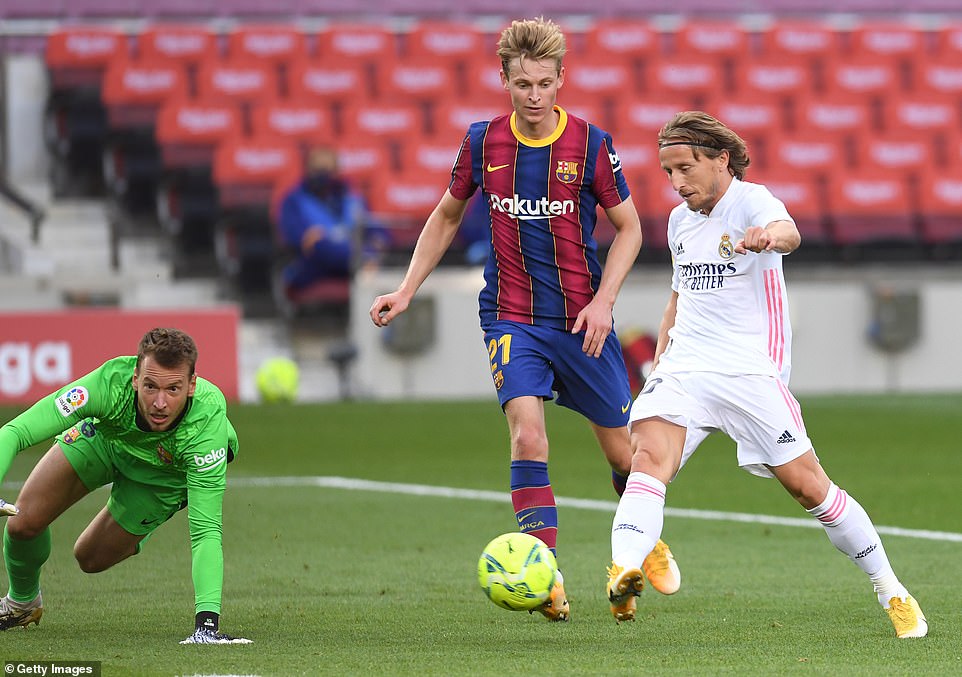 The lead lasted just three minutes. Messi had dropped deep and took a short pass from Frenkie de Jong. He lifted his head and saw Alba who had got behind Nacho. Alba crossed for Ansu Fati who had got in front of Ramos to score from close range.

Messi was lively with several runs at the heart of Real Madrid’s defence. The first should have seen Nacho booked, the second ended when he had to hurdle a wild challenge from Casemiro who was cautioned.

The Barcelona captain was motionless on the turf for several minutes after the foul but he recovered to have Barcelona’s next chance.

He swerved past Ramos in the area and tried to beat Courtois at his near post but the Belgian got down quickly to his left to make the save. 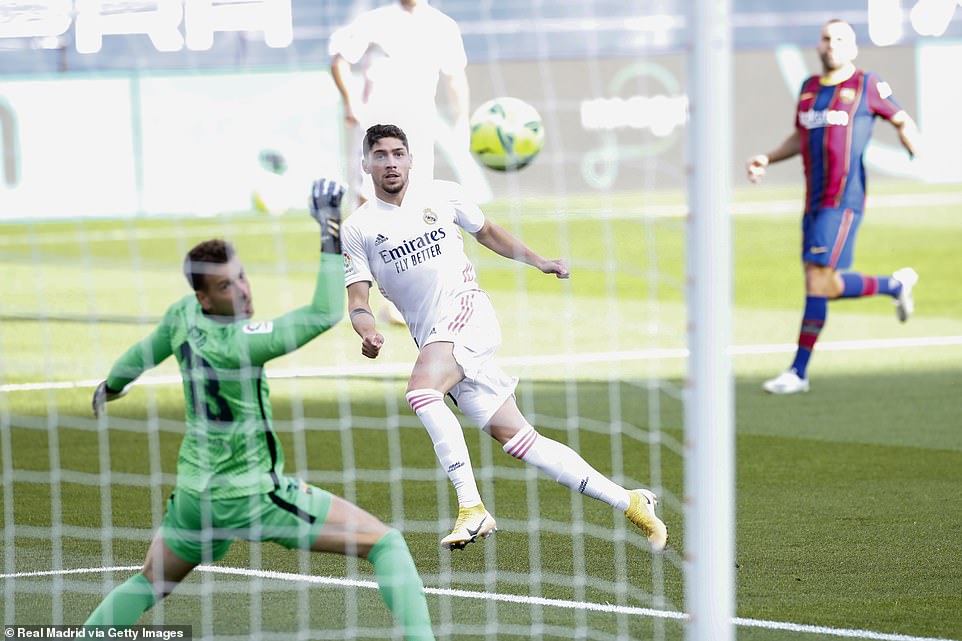 Federico Valverde opened the scoring, bursting through the middle and powering into the top corner after only five minutes 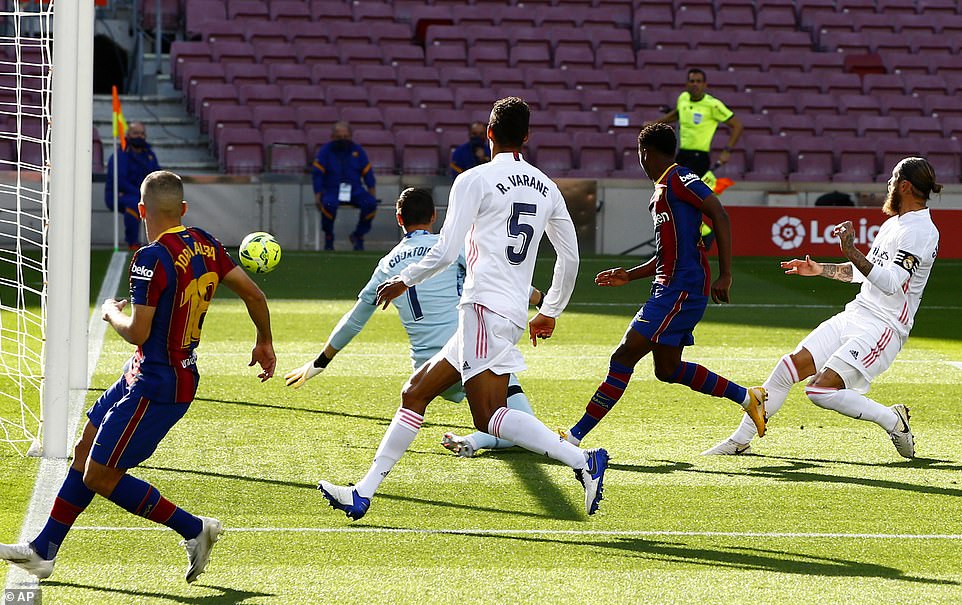 Ansu Fati levelled the score, tapping in after Jordi Alba ran into the box and fizzed a cross to the Spanish wonderkid 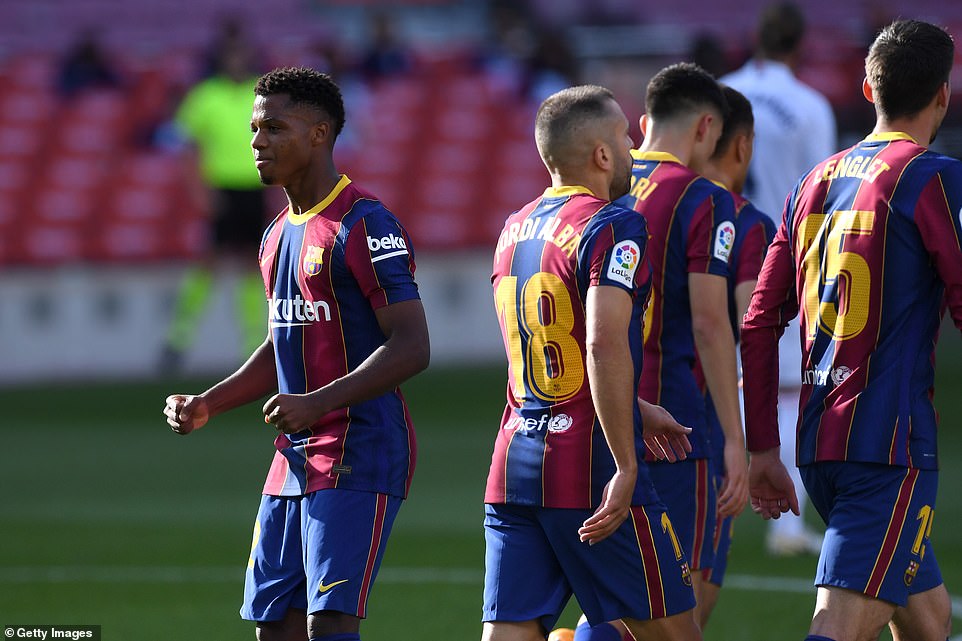 Madrid responded well with Neto saving from Benzema after he finished first time from a Toni Kroos cross.

Messi’s next incursion almost brought a penalty. Pedri, a surprise starter at Antoine Griezmann’s expense, played him in with a short pass on the edge of the box and when Casemiro robbed the ball he brought Messi down in the process.

Replays showed he got the ball first. Referee Juan Martinez appreciated a moment to catch his breath as he consulted VAR.

Casemiro then surged through Barcelona’s defence but the impressive Sergino Dest was strong making an effective block when it would have been easy to bring his opponent down. Madrid were making Barcelona work and Messi was on double shift threatening at one end and defending at the other. 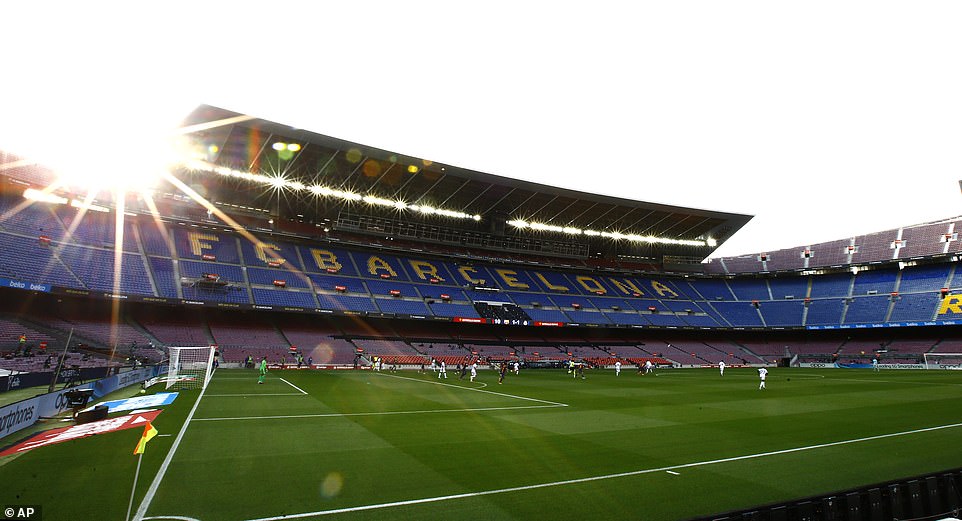 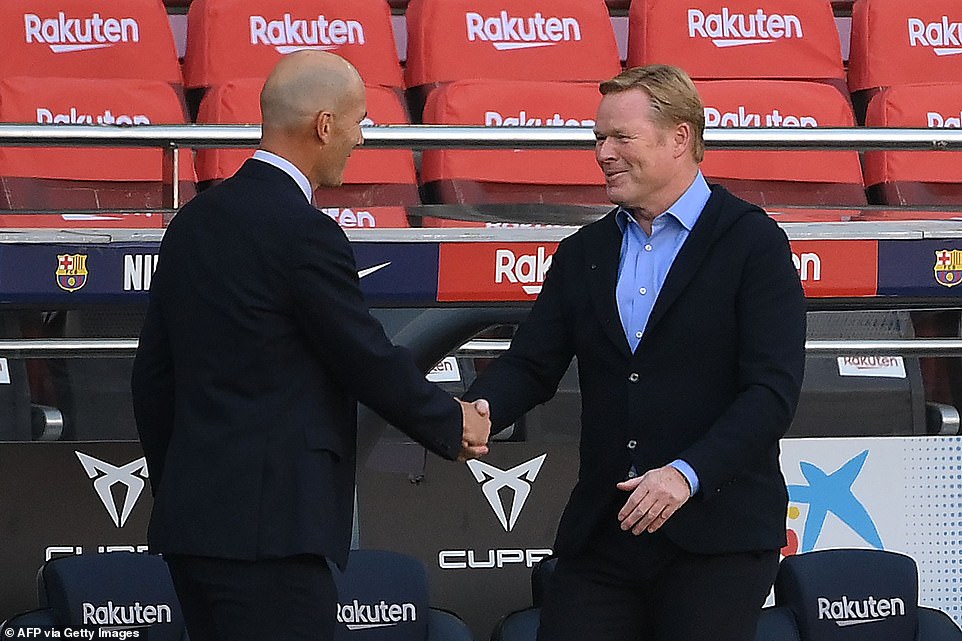 Four minutes before the break Zinedine Zidane was forced to take off the injured Nacho. His replacement Lucas Vazquez’s first intervention was to cut out another pass to the overlapping Alba.

Barcelona came out more brightly for the second period and, having fed Fati, Messi cursed him for not returning the pass and instead shooting just wide. Fati then turned generous provider but Coutinho headed the cross into the side netting.

But Barcelona’s good restart was all undone when Lenglet pulled Ramos’ shirt in the area and referee Martinez went to the pitch-side monitor. Was the tug enough to stop Ramos reaching the cross? Probably not but the image was clear – Lenglet had a handful of Ramos’ shirt and the spot-kick was given. 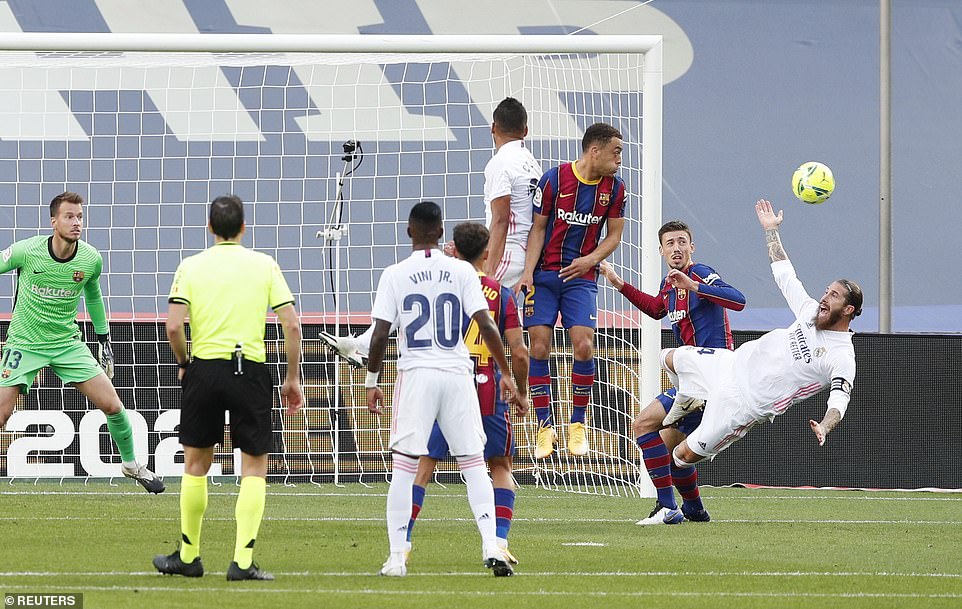 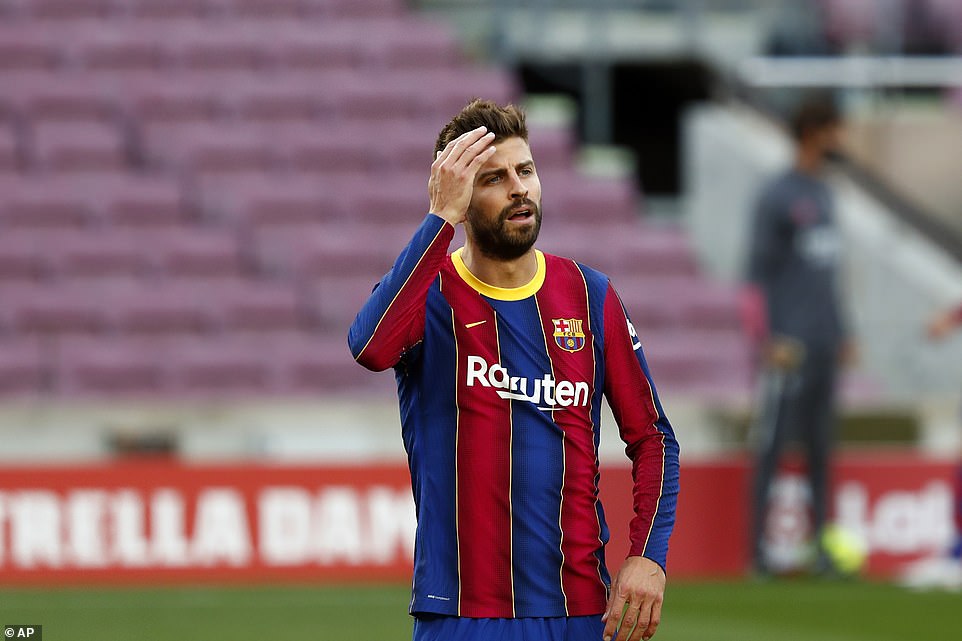 Lenglet is very good defender, he would be an even better one without VAR. Ramos rolled the ball under Neto’s body to put his team ahead. The Real Madrid captain has been warned that one day his very distinctive penalty style will be his undoing. Today was not to be that day.

Real Madrid had needed to take off goalscorer Valverde because the midfielder had suffered a dizzy spell with double vision. Ronald Koeman made his changes late and all at once. Ousmane Dembele, Francisco Trincao and Antoine Griezmann came on for Pedri, Sergio Busquets and Ansu Fati.

Madrid threatened on the break and Neto had to save well from Kroos and Ramos. He couldn’t keep out substitute Luka Modric’s late third goal for Madrid.

Barcelona had nothing left to give. Their changes had confused themselves more than Madrid who from the ashes of two embarrassing defeats had produced their best performance of the season.

Relive all the action as it happened with Sportsmail…