The Big players step up when it matters. Their ability to deliver in the clinch is what makes them so valuable.

And, on Thursday night in Bosnia, Odsonne Edouard showed just why he’s such an asset to Celtic.

True, calling attention to himself with yet another match-winning goal – so close to Monday’s transfer deadline, as well – might cause Neil Lennon to blank a few phone calls over the weekend. Just in case. 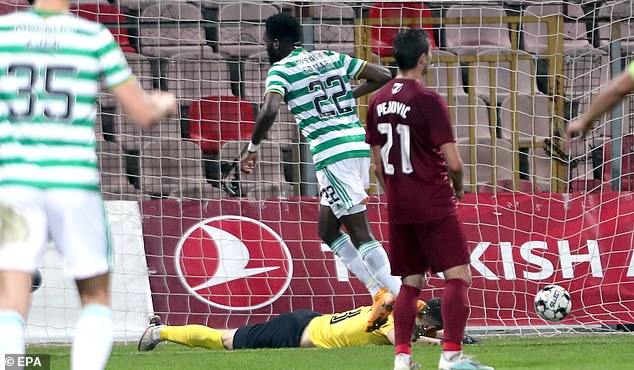 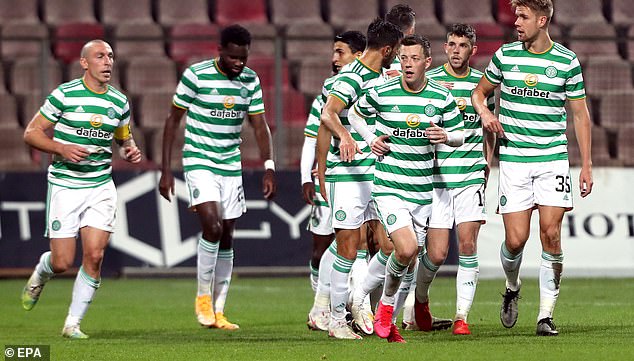 But nobody in Hoops was worrying about hypothetical bids and offers as Edouard fired Scotland’s champions into the Europa League group stages.

A single poacher’s goal from the Frenchman, the reward for 70 minutes of high-intensity pressing, harrying, probing and tearing into the home defences, was enough for Lennon’s men to get the job done.

They’ll go into today’s draw after defeating ‘home’ side FK Sarajevo, who were displaced to their UEFA-approved venue of Cellik Zenica’s Stadion Bilino Polje – and then sent tumbling out by opponents carrying too much quality for the Bosnian title holders.

The visitors outplayed, outshot, out-passed and outfought their opponents, dominating every measurable area of play. Including, in the end, on the scoreboard.

If they might have added the cushion of a second goal in the closing stages, with Sarajevo finally enticed out of their ultra-defensive shell by the need to pursue an equaliser, the margin of victory hardly matters.

In these one-off play-offs brought into relieve pandemic-affected fixture congestion, any win will do.

And, let’s be honest, this was always going to a highly pressurised occasion for Celtic.

Ousted from the Champions League by Ferencvaros, they could always put exiting one UEFA competition down to a combination of bad luck and fuzzy focus. 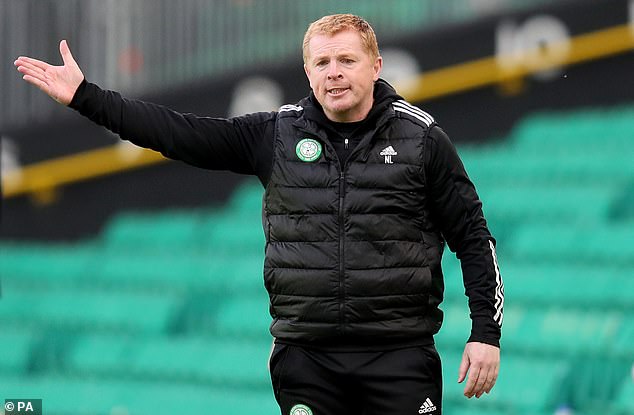 Being punted out of the Europa League as well, piling insult upon previous, grievous injury?

Even in a season destined to be all about one domestic tussle, namely the reigning champions’ attempt to take their run of consecutive league titles into double figures, that would have looked careless. Reckless, even.

That’s a word that accurately described the challenge that put Nir Bitton out of the game with just over five minutes gone, Aleksander Pejovic catching the top of the Celtic player’s foot with a wayward stud.

Bitton was unable to play on, forcing Lennon to throw Hatem Elhamed on to play on the right side of the back three.

Celtic had dominated the opening exchanges against the Bosnian champions, overcoming the inconsistencies of a dry, sandy pitch to build up a decent tempo on the ball. 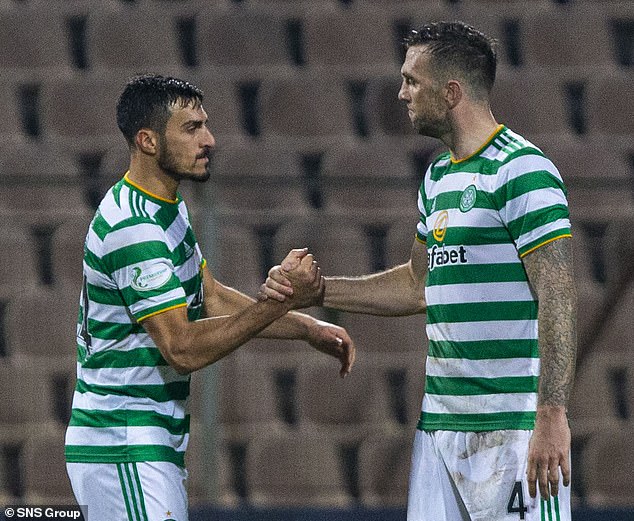 They certainly had plenty of it, with the maroon-shirted hosts apparently happier to sit deep and defend than engage in pursuit of possession.

Chances, though? Not too many. Sure, there were passages of really good, positive, incisive and clever play from the visitors in the first half.

But it’s hard to break down a team who are so intent on simply closing off all passing lanes and forcing their opponents to work for every half yard of space.

Jeremie Frimpong, such an obvious danger man that he was double teamed and delayed almost any time he got into the final third, offered an obvious outlet on the right. Greg Taylor was full of willing on the left.

Both Elhamed and Kris Ajer were encouraged to step out from the back three and cause chaos in midfield, where Callum McGregor and Ryan Christie were models of perpetual motion. 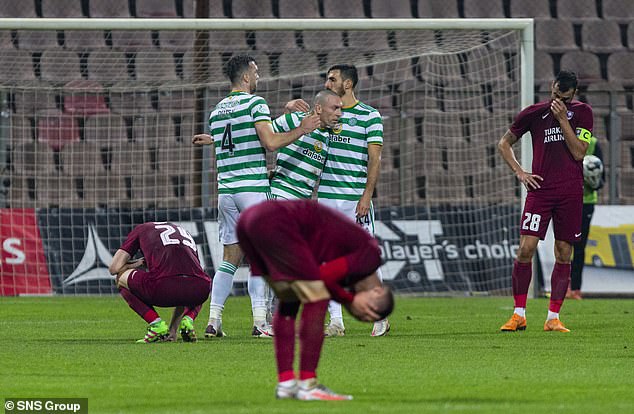 But it took until the 40th minute of the game for all of these moving parts to come together in a series ending with a serious shot on goal, Christie’s ball into the box laid off by Edouard – but regular scorer Mohamed Elyounoussi able only to hit a tame volley too close to the keeper.

As half-time sounded, then, Lennon would have been frustrated by the dearth of clear-cut openings. And perhaps slightly concerned by a couple of more daring Sarajevo counter-attacks.

Celtic clearly expected, however, to wear their opponents down by relentlessly forcing them to over-extend themselves.

Switching the point of the attack, winning every second ball, keeping their hosts penned in, the visitors made Sarajevo look weary and wobbly.

And they inevitably began to exploit some of the gaps, both in open play and through the increasingly number of set pieces.

Ajer really should have done better than to stab a Christie corner wide of goal from seven yards after 52 minutes.

Edouard was just an inch too short to connect with a Taylor cross moments later, Elyounoussi capitalising on the disruption caused to force a solid save with a 20-yarder not without pace or direction. 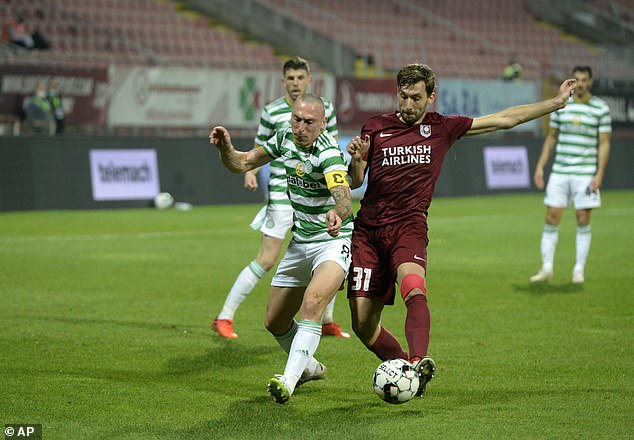 Shooting zones on the edge of the box were now opening up, a Christie 25-yarder just over the bar demonstrating the danger.

And the midfielder’s dead-ball deliveries continued to threaten, with substitute Elhamed unmarked to volley wide one of his corners with just over 20 minutes remaining.

There was always feeling, then, that Christie would be involved in the breakthrough.

That’s how it panned out, the creative livewire taking a neat back-heel from Elyounoussi in his stride and striking a low shot on goal from just outside the penalty area.

When goalkeeper Vladan Kovacevic spilled his effort, Edouard – who had kept himself onside – stepped up to score with a simple finish. 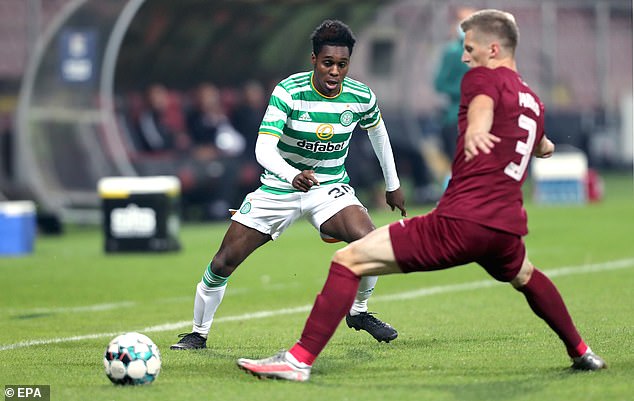 Suddenly Sarajevo found their courage. And were almost made to pay for daring to go on the attack.

Three counters led by the suddenly-energised Edouard presented a hat-trick of three-quarter chances to for team-mates, Elyounoussi spurning one and Christie passing on a pair of decent opportunities.

Despite the absence of a second goal, though, there was never a feeling that Celtic were going to let their lead slip.

As a team, they stayed disciplined and determined. And, with Shane Duffy providing the sort of defensive solidity Lennon has long been seeking, they saw it out comfortably enough.

It’s what big teams, with big players, do.