By David Kent for the Daily Mail

Kim Little gave the hosts the lead when she showed good technique to volley home from 15 yards out from Leah Williamson’s chipped cross.

Dutch countrywoman Vivianne Miedema, last season’s 16-goal top league scorer, got off the mark for the campaign with a composed finish from Jordan Nobbs’ pass before Roord slotted in to make it 3-0 at the break.

Roord completed her hat-trick with tidy finishes at the end of good moves either side of Miedema’s shot from 20 yards that went in off the underside of the bar.

Danielle Carter grabbed a late consolation when she stole the ball from Arsenal keeper Manuela Zinsberger.

Nothing went right for Reading, especially Wales midfielder Jess Fishlock who was making her debut and had her name mis-spelled on the back of her shirt.

Arsenal have had a head start this season, playing in the Champions League quarter-final by Paris St-Germain in August and that showed. 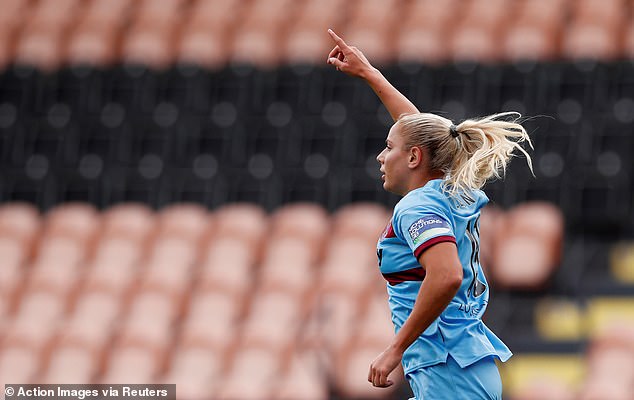 Adriana Leon fired a superb equaliser as West Ham kicked off their campaign with a 1-1 draw at Tottenham.

Kit Graham hit the crossbar twice as Spurs dominated the first half then took the lead through a Grace Fisk own goal.

But the new-look Hammers levelled four minutes later when Canadian international Leon cut in from the left win and drilled her shot into the top right corner.

Nicoline Sorensen went close with an early header wide for the visitors, Graham set up the opener for Simone Magill to slot into the corner.

Graham netted Everton’s second on the counter and fired home the third from the spot after Magill was brought down. France striker Valerie Gauvin also scored late on to complete the victory.

It was an impressive start by the Toffees, who are hoping to build on last season’s sixth place after strengthening their squad with the arrivals of Sorenson and Gauvin, and the return to fitness of England midfielder Izzy Christiansen.

Megan Connolly and Inessa Kaagman both scored within two second half minutes as Hope Powell’s Brighton began their campaign with a 2-0 win over Birmingham. The Midlanders had four players making their debuts and a new manager in Carla Ward but could not fill the bench.