Wesley Fofana urges Saint-Etienne to sell him to Leicester

‘I’ve always dreamed of playing in England, I’d be crazy to say no’: Wesley Fofana urges Saint-Etienne to sell him to Leicester with £26m defender desperate to move to Premier League

Wesley Fofana has underlined his desire to join Leicester City by asking Saint-Etienne to sell him.

The 19-year old centre back is Brendan Rodgers’ prime target to strengthen his defence, as reported by Sportsmail, and Leicester are understood to have made an offer of around £26million.

Talking to French paper L’Equipe, Fofana said: ‘I’ve received a lot of offers. It’s normal to have them checked with my agents.

‘They didn’t agree to me talking. But what just happened broke something in me.

‘My decision is made: I accept an offer. Yes (to Leicester). I’ve always dreamed of playing in England. This time I can’t refuse.

‘Where I come from, the northern districts of Marseille and a not well-off family, that’s not possible. I’d be crazy to say no to Leicester. This contract can change my life.

‘I have to protect my family by keeping them safe. The sporting and financial aspects being combined, I have to say yes. 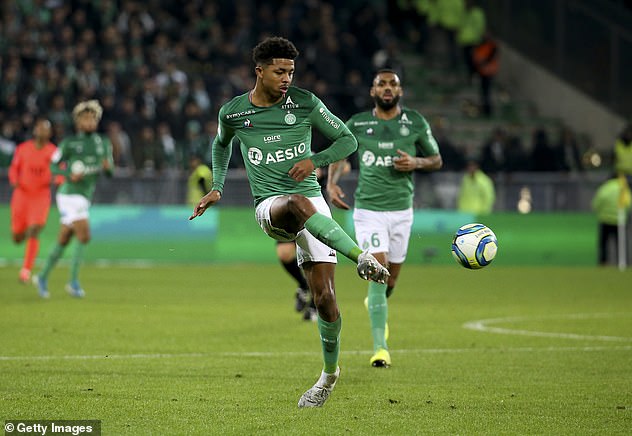 ‘I am determined and mentally ready to change my life. By putting in that sum, Leicester is proving that they really want me.

‘It’s not like I want to leave for a club where the number of central defenders is immense. It is a real sports project.’

Leicester have watched Fofana for some time. Though still raw, he is regarded as one of the best defensive prospects in Europe and has interest from AC Milan, Red Bull Leipzig and West Ham among others.

Leicester hope Fofana’s comments can help conclude a deal and want to add another winger before the window closes.