Hailed recently as a ‘Rolls Royce of a boy’ by Derek McInnes, Ross McCrorie’s dream start to life at Aberdeen continued as the Dons cruised into the third qualifying round of the Europa League.

The former Rangers midfielder’s first European goal for his new club against Viking FK was enough to plunder a glamour date with Portuguese giants Sporting Lisbon.

On an evening in Stavanger when the Pittodrie side created chance after chance, it was down to the Scotland Under-21s captain to finally break the Norse Code. 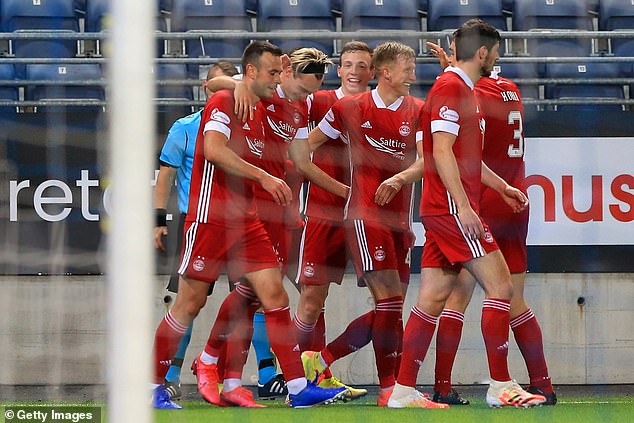 Ryan Hedges surprisingly scored direct from a corner, and Aberdeen held on for the 2-0 win

Hot on the heels of opening his account at Pittodrie with the winner against Kilmarnock on Saturday, the versatile 22-year-old — playing last night on the right side of midfield — steered a fine volley into the net on the stroke of half-time.

That put Aberdeen in the driving seat before Ryan Hedges made sure of progression by scoring an eye-catching second direct from a corner with 12 minutes remaining.

In previous years under McInnes, the Quest for the Holy Grail of group stage European football has ended against Real Sociedad, Kairat Almaty, Maribor, Apollon Limassol and Burnley.

However, Sporting Lisbon at Jose Alvalade Stadium next Thursday night may not be as daunting as it seems at first glance with the Portuguese side missing seven first-team players and lacking match practice due to a recent Covid-19 outbreak.

McInnes made just one change from the side that beat Killie 1-0 at the weekend with Dylan McGeouch replacing Matty Kennedy. 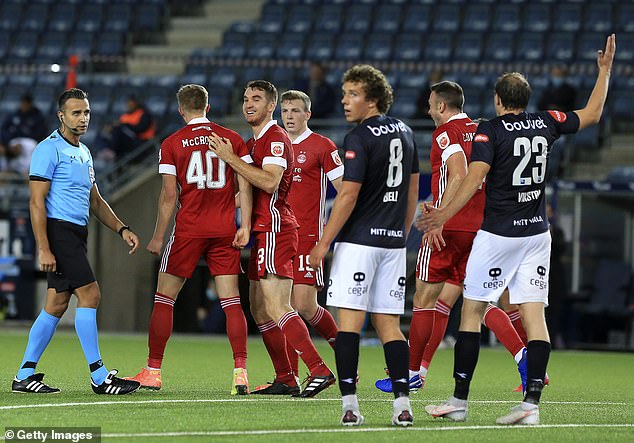 There was some offside controversy, but the officials decided to award Aberdeen the goal 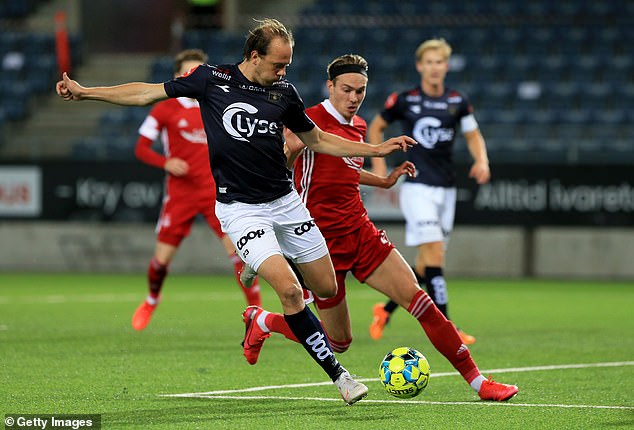 Viking, who finished fifth in Norway’s Eliteserien last season, are 17 matches into their new domestic campaign and they looked fresh from the first whistle.

The hosts came close to taking a lead within the first minute when Zymer Bytyqi fired a shot narrowly wide.

But Aberdeen began to carve out a series of good chances. Jonny Hayes had a fine driving run down the left and put an inch perfect cross into Marley Watkins.

The on-loan Bristol City forward was hoping to record his first goal in an Aberdeen shirt but his header was tipped onto the bar by Viking keeper Iven Austbo.

Moments later, Scott Wright should have opened the scoring after scampering clear of the Viking defence and bearing down on goal.

But his effort was low, lacking in conviction and straight at Austbo who made a vital block with his left leg. 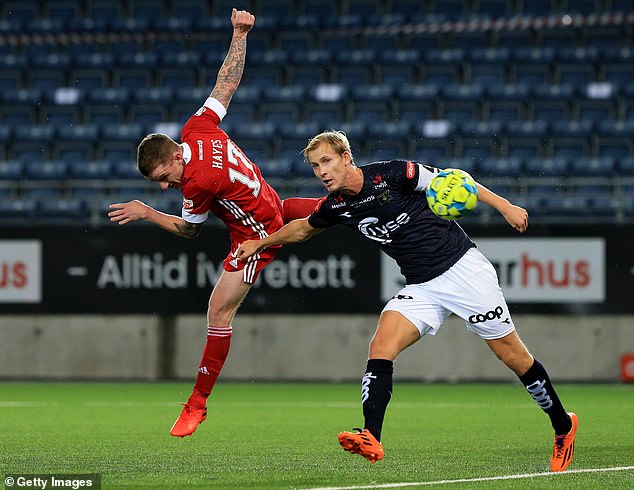 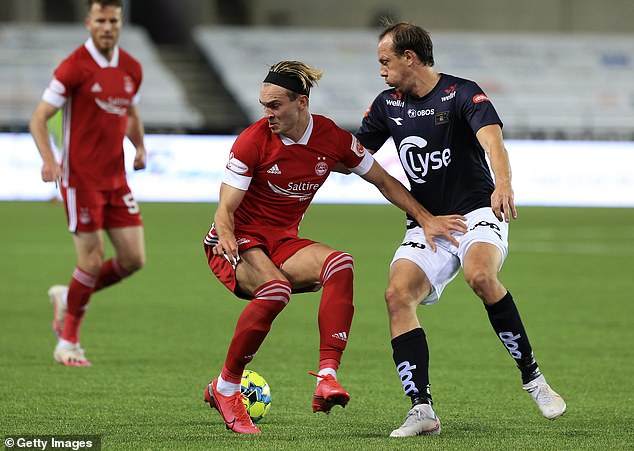 It then took a timely intervention from defender Andy Considine to stop Yildren Ibrahimaj pulling the trigger at the other end from a cut back by Veton Berisha.

And moments later Ibrahimaj had a great chance and should have scored with a free header from close range but he panicked and sent a poor effort wide.

McInnes had predicted before the match that the one-off nature of the qualifiers this summer due to coronavirus would result in an open game and so it proved.

McGeouch was next to try his luck from distance but his shot was straight at keeper Austbo.

Then Lewis Ferguson had a chance but when he tried to curl a shot from the edge of the box into the corner of the net, the ball ended up nestling just the wrong side of the post.

Aberdeen were playing well and creating enough chances to win several games but the longer the half went on the more it looked like it would come back to haunt them.

But just 90 seconds before the break the Dons made the all-important breakthrough when Hedges fed Wright at the edge of the box. 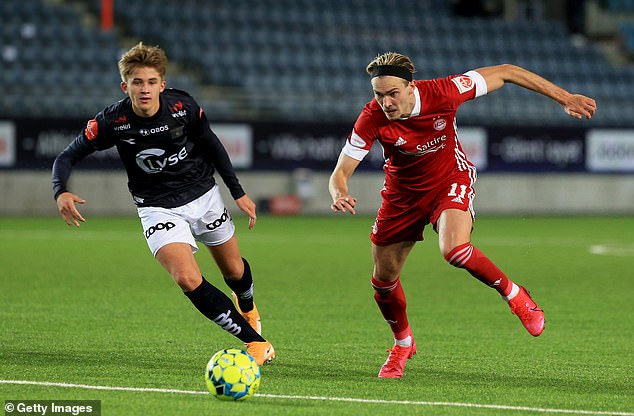 Hedges doubled Aberdeen’s lead with not long to go, and Viking couldn’t mount a comeback

His fierce shot cannoned back off a defender and man-of-the-moment McCrorie reacted quickest, sending a terrific guided volley into the net.

There was a moment when it looked like the effort would be chalked off when Slovakian referee Filip Glova went over to the touchline to check with his assistant Peter Bednar.

After debating whether Considine had been offside and blocking keeper Austbo’s view, they jointly decided that the goal should stand.

After the break, the game remained just as open and a well-worked Viking corner ended with Berisha shooting narrowly wide.

Watkins and Ferguson both had chances to extend the Scots’ lead but Bytyqi had a chance for Viking. Lewis then made a rare save from Bytyqi as Viking desperately searched for a leveller.

But Hedges grabbed the goal that his performance richly deserved when his corner looped over Austbo and into the net at the back post to secure Aberdeen’s passage to Lisbon.