‘I don’t think he tried to stay on his feet’: Copenhagen boss Stale Solbakken says Anthony Martial DIVED to win the decisive penalty for Manchester United in Europa League quarter-final

FC Copenhagen manager Stale Solbakken admitted his players should have taken a leaf out of Anthony Martial’s book and gone down easier in the penalty area during Monday’s Europa League quarter-final defeat against Manchester United.

Martial won the decisive penalty in the first-half of extra-time when he went down under the challenge of Copenhagen defender Andreas Bjelland, with Bruno Fernandes converting what proved to be the match-winning spot kick.

However, while Solbakken was proud of his players, he took a swipe at French forward Martial for not staying on his feet, even adding that his players could have been smarter at points in the match and followed suit. 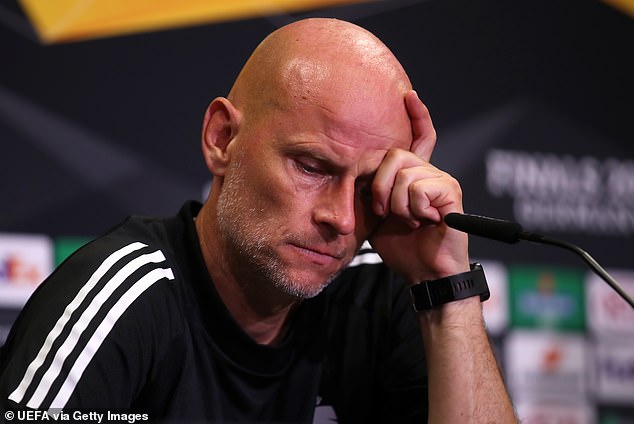 ‘If my players had been a little bit more clinical they could have gone down and got a penalty,’ Solbakken told beIN SPORTS.

‘You can’t encourage them to go down. It’s a fine balance between being too honest. I don’t think Martial tried to stay on his feet for too long. But that’s life and it can be given.

‘This game is not about penalties. This game is about a Scandinavian team with players who have never played at this level, and make a real performance and it’s quite a good 90 minutes.

‘United win because they win the first 15 minutes of extra-time.’ 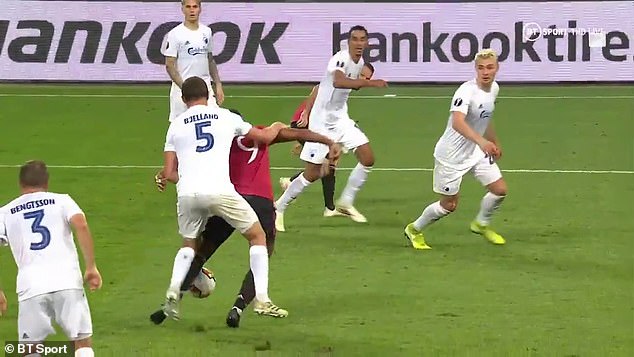 Martial was praised after the quarter-final victory for his performance, with Owen Hargreaves describing him as ‘a Ferrari – he just looked like a £100million player.’

His BT Sport colleague, Paul Scholes, added: ‘He’s turning into a No 9 more and more every game I watch.

‘He’s normally a brilliant finisher but tonight the finishing wasn’t quite there.’ 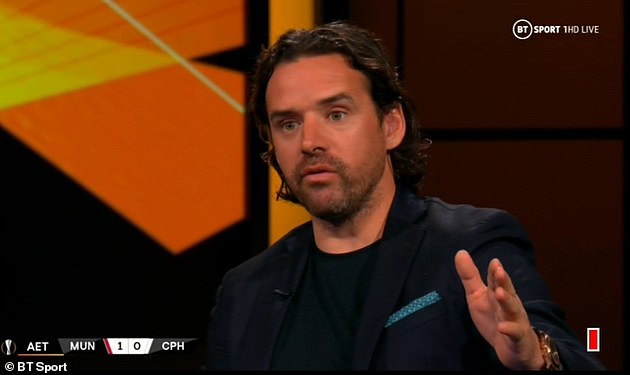 Owen Hargreaves was full of praise for Martial in the BT Sport studio, hailing his recent form

Completing a trio of Martial admirers in the studio, former United striker Robin van Persie said: ‘Martial always haw an eye for his team-mates and that’s what sets him apart from the others.

‘That’s why I think he’s a world class player.’

United’s victory means they will face either Wolves or Sevilla in the one-legged semi-final on Sunday night in Cologne. 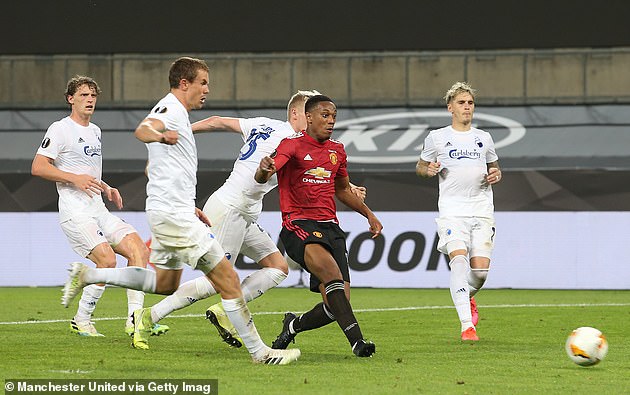 Martial’s form has been unstoppable since football resumed, scoring eight goals in 13 games