When Wolves fans gather in years to come and talk of missed opportunities, Duisburg 2020 will surely figure near the top of the list.

This was where Raul Jimenez, one of the best forwards in the business, for once lost his nerve from the penalty spot, missing for the first time for Wolves, and for only the second time in his career. The kick had been awarded after a thrilling burst from Adama Traore was halted illegally inside the box, and would have given Wolves the perfect start to their 59th game of this extended season.

Yet Jimenez’s shot was saved and with that chance went Wolves’ dream of setting up a Europa League semi-final against Manchester United. They may quibble about whether goalkeeper Bono gained an illegal edge by leaving his line, or whether Sevilla defenders had encroached into the area, but Jimenez knows it was a poor attempt. 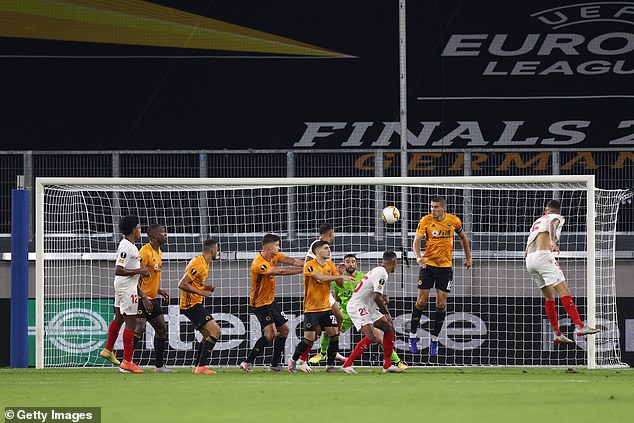 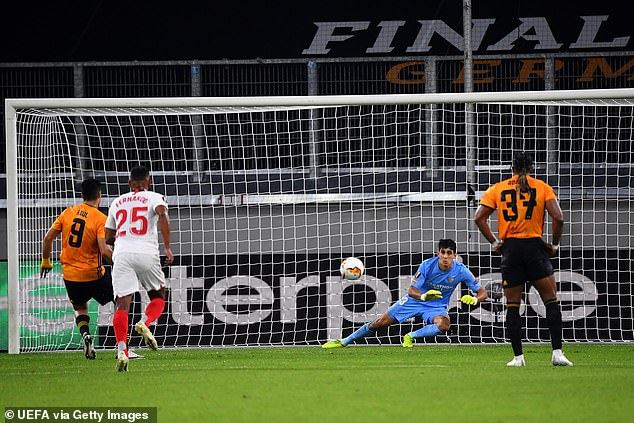 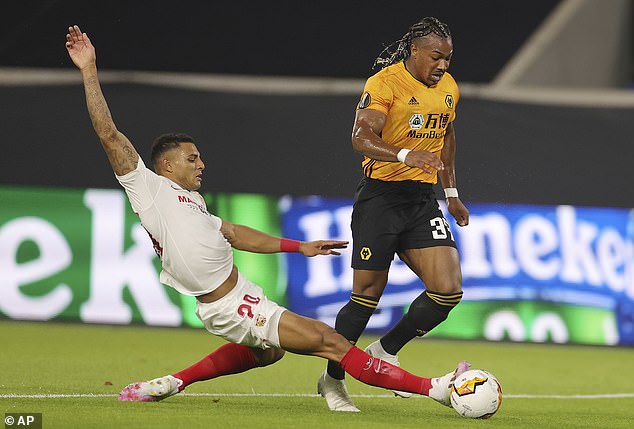 As lightning flashed and thunder growled above the MSV-Arena, Sevilla – five times winners of this competition – gradually took control. That they had to wait until the 88th minute to make their superiority count, Lucas Ocampos heading in the brilliant Ever Banega’s cross, will make it all the more painful for Wolves. After the final whistle, Jimenez stood alone in the centre circle, staring at the goal where he was denied.

Wolves’ season, which began on July 25 last year in the second qualifying round against Crusaders, had finally ended. In barely a month, they will be back in action again, if the Premier League resumes as planned on September 12. Coaxing these exhausted players back to mental and physical fitness will be a huge challenge for their accomplished coach, Nuno Espirito Santo.

It was no surprise, either, that he should talk afterwards of the need to improve the squad. ‘We need players that can make us stronger, no doubt about it,’ said the Portuguese.

Having watched his side struggle for long periods in their 1-0 win over Olympiacos last Thursday, Nuno opted for a more cautious 3-5-2 formation, with Traore alongside Jimenez in attack.

The plan was to sit deep and use the pace of Traore on the break – and it nearly worked to perfection in the 11th minute.

After the penalty miss, Sevilla dominated large amounts of possession for the rest of first half 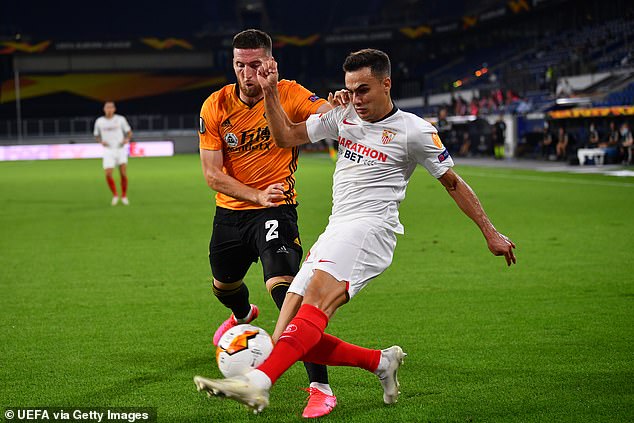 Ruben Neves found Traore well inside his own half and he turned and picked up speed like an Olympic sprinter, powering past three challenges before he was hacked down by Diego Carlos.

It was a clear penalty and yet Jimenez, magnificent all season, could not deliver. He stuttered once too often in his run-up and the shot was weak, allowing Bono to keep the ball out. Replays appeared to show that the goalkeeper was off his line, and that Diego Carlos encroached into the area to get a foot to the ball before Jimenez. After a scramble, the ball reached Joao Moutinho, who failed to keep his volley on target.

Sevilla grew into the game and produced their first chance when former Liverpool youngster Suso forced Rui Patricio into a sharp save from 20 yards.

In the 22nd minute, Youssef En-Nesyri climbed above Willy Boly but directed Jesus Navas’ cross over the top, and the Moroccan forward was off target again soon afterwards with an angled drive.

Ocampos had Wolves nerves jangling when he shimmied away from Boly on the left and sent the ball arcing towards Patricio’s left corner, only for it to drop just wide of the post. Nuno paced his technical area, arms folded, his tension clear. 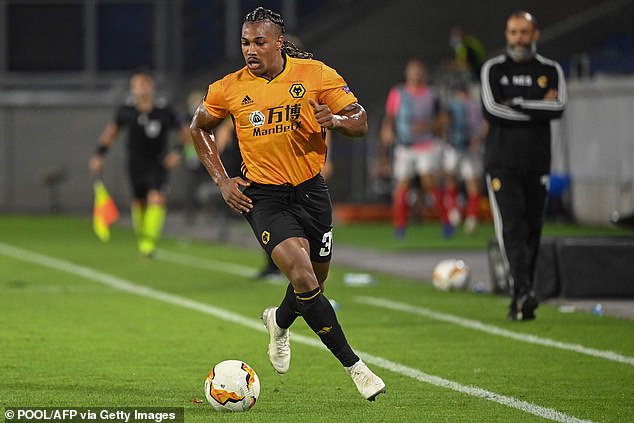 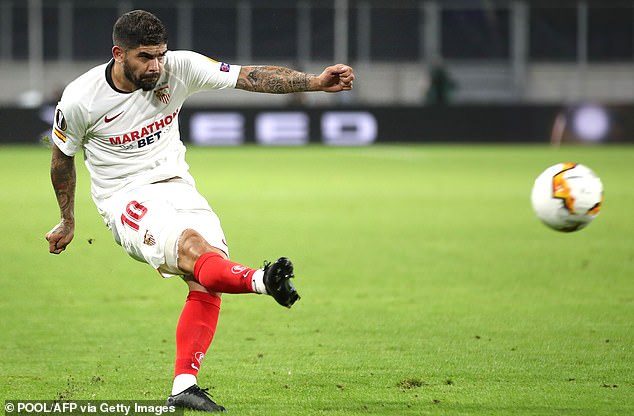 The sound of the half-time whistle allowed Nuno and his players to draw breath. They could not, however, change the pattern of the match.

The problem with using Traore as an out-and-out forward is that while he has incredible speed, he has little of the craft the role requires. Some of the service towards him was aimless, yet Traore’s inability to hold on to the ball meant it kept coming back at Wolves.

At the back, Boly, Conor Coady and Romain Saiss were resisting superbly along with Matt Doherty on the right. Coady bellowed ‘Organise, organise!’ at regular intervals as Sevilla moved the ball from left to right, Banega sliding it into gaps for Suso or down the right for Jesus Navas. When Wolves did have a rare chance to break, Jimenez rushed the final pass. Twice the Mexican could have played in Traore and Doherty and left his team frustrated when he misjudged.

Ocampos had moved to the right for the second half and he found space for a cut-back near the hour mark, forcing Dendoncker to steal the ball from En-Nesyri’s toes and concede a corner.

The centre forward was frustrated again soon afterwards when he barged through but was off balance when he shot, allowing Patricio to claim. Suso had looked a fine player all night and he showed it again with a delightful clipped ball that Jules Kounde headed high from six yards.

Nuno made an attacking change with 20 minutes left, bringing off Moutinho and introducing the pace of Pedro Neto. That meant a switch to 3-4-3, with Traore pushed wide on the right and Jimenez left to joust alone with the Sevilla centre backs.

As Diogo Jota waited to replace Traore, Coady brought down Banega on the edge of the box and Patricio flew to his left to palm over the Argentine’s delicate effort. But Banega had the final word when he guided over a perfect cross from the right and Ocampos’ flicked header was enough to send Sevilla into the last four.