Mr Nice Kai! Chelsea new boy Havertz ‘gave up his £9m bonus to push £89m move through’ from Bayer Leverkusen – as he takes the Blues’ No 29 shirt

Chelsea new boy Kai Havertz reportedly passed up on a £9million transfer bonus in order to secure his dream move to Stamford Bridge.

With Frank Lampard’s side and Bayer Leverkusen locked in talks for Havertz all summer, the 21-year-old is said to have personally intervened to help speed up the process.

Havertz passed up on his cut of the transfer fee which was written into his contract in order for Leverkusen ‘to have more security’ and retain the full transfer fee, according to Sport Bild in Germany. 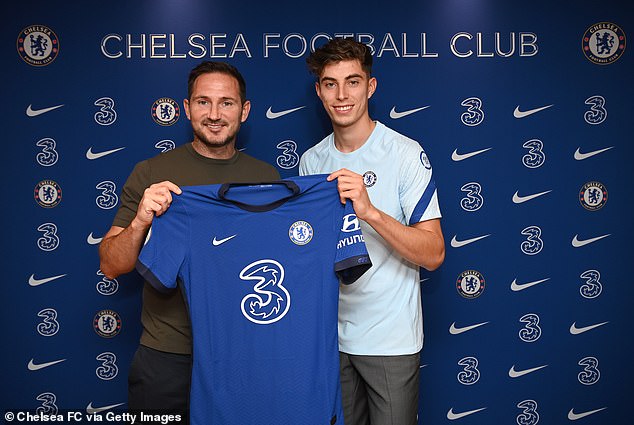 Leverkusen therefore did not have to pay out the £9m which was due to the player and were able to boost their bank account to a greater degree as a result.

The youngster has however now become one of the top earners at Chelsea, signing a deal which promises him a salary of around €100million until 2025.

In pounds this roughly translates to the 21-year-old pocketing in the region of £18m per year for the duration of his five-year deal in west London.

Havertz has also taken the No 29 shirt at Stamford Bridge. 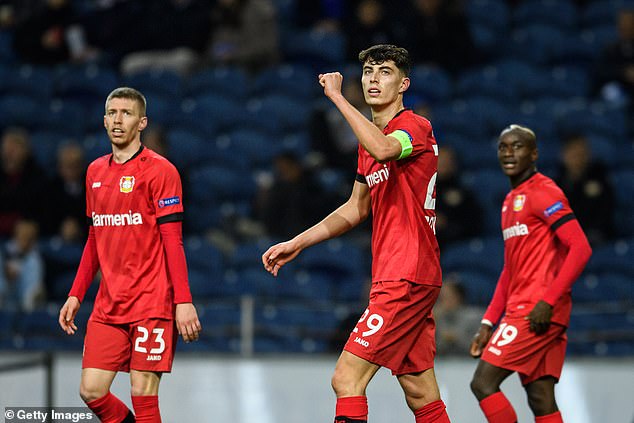 This week Lampard admitted he was simply ‘overwhelmed’ by how down to earth his new signing is, despite Havertz being one of the most promising and highly rated youngsters in world football.

Lampard told Chelsea’s official website: ‘Kai is a really exciting signing for myself and for the club first and foremost.

‘We also have to understand that he is a fantastic young talent but we must give him time to let him settle and let those talents come through.’

‘On his personality, I have been absolutely overwhelmed with how humble and down to earth he is, and how well he wants to do here, and how he is very excited with the challenge.

‘He wants to come here and be a top player for Chelsea, and really prove his talents on this stage.’

Chelsea open their Premier League campaign with a trip to the south coast to face Graham Potter’s Brighton.

The two teams recently played each other in a quickly arranged pre-season friendly, in which the spoils were shared following a 90th-minute equaliser from Pascal Gross to cancel out a debut goal for Timo Werner.