Manchester United, Barcelona and PSG ‘keep tabs on £50m-rated Pierre-Emerick Aubameyang’ as Arsenal accept star striker will NOT sign a new contract before deal expires in 2021

Arsenal are resigned to losing Pierre-Emerick Aubameyang as Manchester United, Barcelona and PSG consider a move for the striker, according to The Sun.

The Gunners have reportedly accepted the fact their star man will not sign a new contract, despite being offered improved terms.

Aubameyang’s current deal expires in the summer of 2021, meaning he is free to talk to clubs outside of England next January.

Manchester United, Barcelona and PSG are all reportedly keen on Pierre-Emerick Aubameyang

On Wednesday, Spanish newspaper Sport reported that Arsenal had put a £50million price-tag on Aubameyang amid sustained interest from Barca.

But it now seems the Spanish giants face competition to land the 30-year-old forward, who has 17 Premier league goals this season.

Manchester United, who are in the market for a new striker this summer, and PSG are also keen on Aubameyang, according to The Sun.

They claim that all three clubs believe that Aubameyang will be available for around £35m when the transfer window reopens. 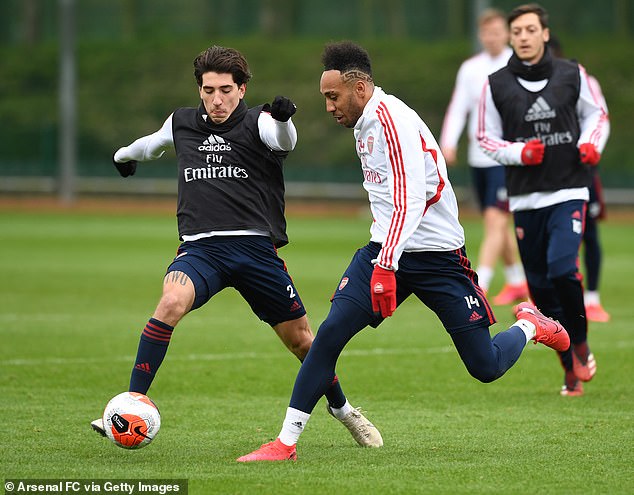 Arsenal do not want to lose their captain on a free transfer and will look to cash in on him this summer if he does not make a u-turn on his future.

Last week, Gunners legend Ian Wright admitted that Aubameyang deserved to be playing for a better team than his beloved Arsenal.

‘If you can imagine him in a better team, he would be winning Premier Leagues and vying for places in Champions League finals and I think he deserves that,’ Wright told Premier League Productions.

‘You don’t see him particularly vocal on the pitch, [no] pointing and screaming, but it’s what he does in respect of his leadership with the goals that he scores.

‘If you take his goals out of that team then they’re in a massive heap of trouble. Arsenal need a few more players to kick in with their form to help him.’