‘Win titles with PSG, play with some of the best players in the world and one day be able to return home’: Ander Herrera hopes after winning trophies in Paris he can play for Zaragoza

Paris Saint-Germain midfielder Ander Herrera hopes to return to his boyhood club after he wins trophies in the French capital.

The 30-year-old would like to move back to Real Zaragoza, where he joined as an 11-year-old back in 2001 and later broke into the senior team before moving to Athletic Bilbao in 2011.

There have been rumours that Herrera could rejoin Bilbao, but he has said his preference should he return to Spain is to play for the club that raised him.

In an interview with the Hoy Jugamos En Casa Youtube programme, Herrera said: ‘My hope is to enjoy my time in Paris, win titles with PSG, play with some of the best players in the world and one day be able to return home, which is Zaragoza.

‘I am extremely lucky to have been able to play for Athletic and enjoy the philosophy there, which is fantastic, but my hope is to return to Zaragoza, the club I’ve supported since I was young.

‘I am still a member and I will continue to be one for the rest of my life – my daughters are too. When I’ve worn the shirt of Athletic, Manchester United or PSG, I’ve always tried to represent them and defend for them as if I was their biggest fan in the world, but my team is Zaragoza.’ 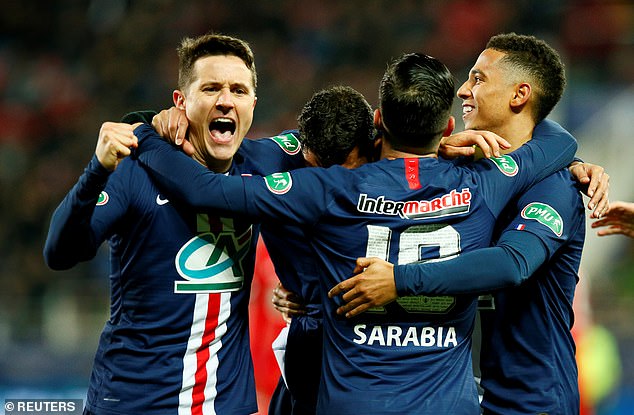 Herrera broke into the Zaragoza first team back in 2009 and made 86 appearances for the club before moving to Bilbao for £6.75m.

After three years in Bilbao and then five years playing for Manchester United, Herrera moved to PSG in the summer of 2019.

He has struggled to become a regular starter for the French side with injury hampering his progress and only starting on eight occasions.

But the Spaniard knows he has a real chance of major success at the club, with the side top of the Ligue 1 and still in the Champions League.