‘I knew he was going to change the dynamic of the team’: Odion Ighalo hails Bruno Fernandes and vows ‘you’re going to see more’ once fellow Manchester United new boy is settled

Odion Ighalo has praised Bruno Fernandes’ start to life at Manchester United but he believes the Portugal international will flourish once he settles in England.

Both players arrived at Old Trafford during the January transfer window with Ighalo sealing a short-term loan move from Shanghai Shenua and Fernandes signing a five-and-a-half year contract in a £68million transfer from Sporting Lisbon.

The pair previously played together at Serie A club Udinese and the Nigerian says Fernandes’ passing ability will ‘change the dynamic’ of Ole Gunnar Solksjaer’s side.

‘It’s not my first time playing with Bruno. I played with him at Udinese back in 2010,’ Ighalo told BBC Sport.

‘He’s a great player. He has vision. He’s the guy who wants the ball because he can do something fantastic with it if you give him space. He’s a good passer of the ball and he’s what this team needs to score goals.

‘You’re still going to see more and better from him because he is still getting used to the Premier League. When he’s finally settled Bruno Fernandes is going to do well in this team. 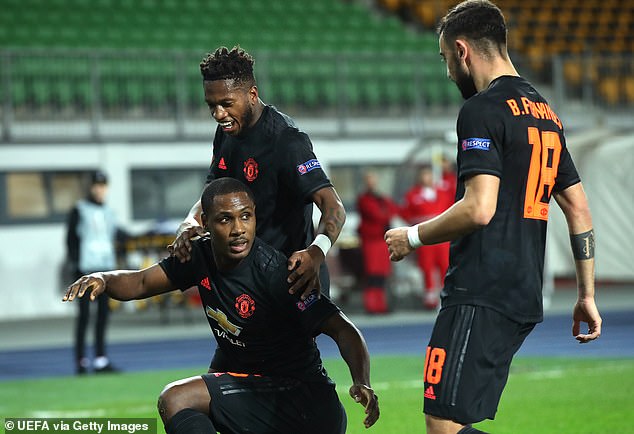 ‘Before I came here I knew Manchester United were looking at him and I was hoping they would get him because he is a good player and I knew he was going to change the dynamic of the team.

‘He’s not going to have the best game every time but what he is going to bring to the team is going to be unbelievable.’

Ighalo has now netted four goals in eight United appearances after opening the scoring during the 5-0 hammering of LASK in the Europa League round of 16.

The first leg took place behind closed doors at Linzer Stadion to prevent the spread of Coronavirus. The second leg was scheduled to take place on Thursday 19 March, but the fixture has been suspended.