Breaking News
Home / Champions league / Should Jordan Henderson be crowned PFA Player of the Year? Here’s why he is favourite for award

Should Jordan Henderson be crowned PFA Player of the Year? Here’s why he is favourite for award

With Liverpool now just six wins away from sealing a first Premier League title, attention naturally turns to the rest of the prizes on offer this season.

For other teams, that is the top four, the domestic cups or potentially a shot at Champions League glory.

For the players, there are a host of individual awards, with the PFA Player of the Year trophy – voted for by fellow professionals – the ultimate indicator of performance over the season. 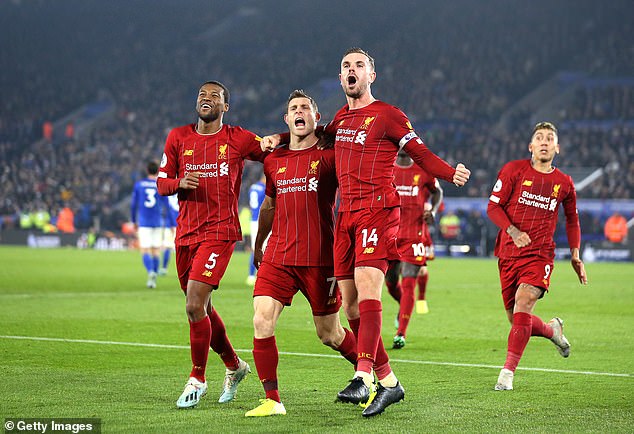 And in a campaign where Liverpool have swept all before them in the league, an Anfield star has unsurprisingly emerged as favourite for the POTY crown.

What is surprising is the identity of that Liverpool player. It is not 2018 winner and third-top league scorer this season Mohamed Salah, nor is it the incumbent and marshal of the country’s stingiest defence Virgil van Dijk.

Instead it is Jordan Henderson who, with typically understated excellence, has risen to the very top.

In a team defined by their relentless work on and off the pitch, Henderson remains the gold standard. Finally, this is the chance to acknowledge and reward that.

Such is Liverpool’s domination this season that, according to SportNation, alongside Henderson at 6/4, three other Liverpool stars – 7/2 Mane, 11/1 van Dijk and 14/1 Salah – are in the top five contenders with 6/1 Kevin De Bruyne of Manchester City the odd man out.

The 29-year-old would also become the third consecutive Liverpool winner, after Salah in 2018 and van Dijk in 2019, while he could join Luis Suarez, Steven Gerrard, John Barnes, Ian Rush, Kenny Dalglish and Terry McDermott as the ninth Anfield alumni to be awarded the honour since it was introduced in 1973.

Henderson’s sudden elevation to individual award contention is certainly not a tale of overnight success, but instead a culmination of ceaseless work and undimming drive.

No player played in more Premier League games in the previous decade than Henderson. Second in that list was his Liverpool team-mate James Milner. 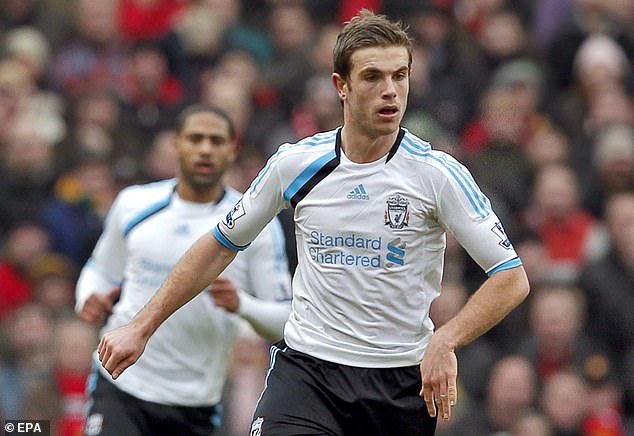 PFA PLAYER OF THE YEAR ODDS

To even be in discussion for the coveted prize is a marker of just how far Henderson has come since making the £20million move from Sunderland in 2011.

That transfer, of course, only came after Manchester United had passed him over due to concerns his running gait may lead to injuries as later revealed by Sir Alex Ferguson.

Henderson copped some flak from supporters for his initial displays as he struggled to settle in a Liverpool team going through an extended transition period under Kenny Dalglish until he was sacked in May 2012. 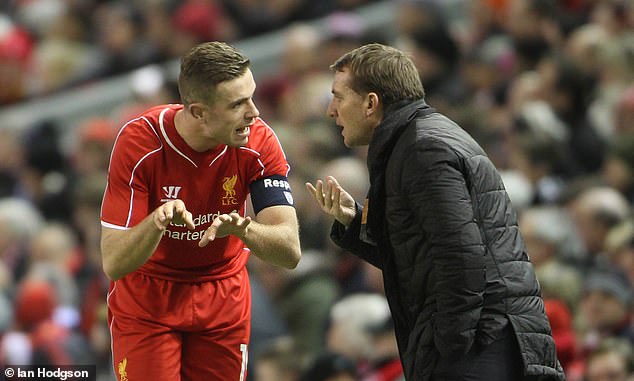 It was under Brendan Rodgers that Henderson first began to flourish – but even the Northern Irishman wasn’t initially convinced and was prepared to let his young charge leave for Fulham in a swap deal with Clint Dempsey in summer 2012.

Henderson would ultimately stay and proved a vital cog in the 2014 side that came so close to snatching the title away from Manchester City. It was only in the final four games, of which Henderson missed three due to suspension, that the trophy would slip from their grasp.

While the club struggled to sustain a regular title challenge, Henderson’s personal influence would continue to grow – especially when club legend Steven Gerrard departed in 2015 and the captain’s armband was passed on. 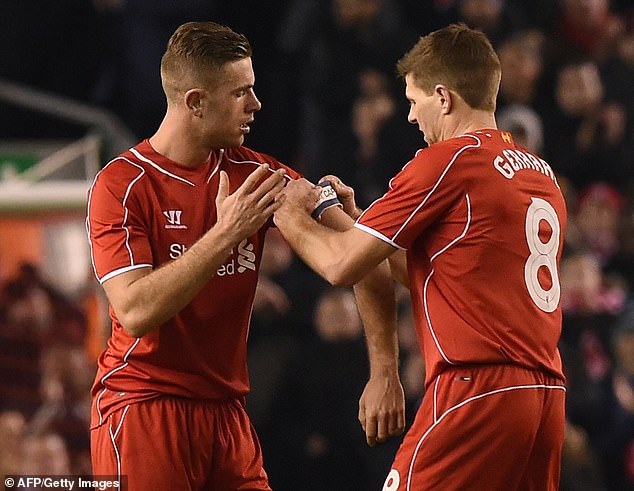 Gerrard had his own say after Henderson followed the Rangers boss in lifting the Champions league trophy as skipper.

‘When Jordan Henderson lifted the Champions League trophy above his head, my first feeling was one of pride,’ Gerrard told The Times.

‘Proud that Liverpool were back at the top of European football and especially proud of Jordan, because I know how hard he works. I know the sacrifices he has made, the pressure and scrutiny that he has been under.

‘If I had to name someone I regard as the ultimate professional, then Jordan would come right at the top of the list. He is immaculate in the way he lives his life.

‘He is an incredible role model. He is selfless. He puts himself at the back of the queue because he looks after everyone else first. He puts Jordan Henderson last.

‘All of that is important but, of course, he is a top player as well. He has running power, you can trust him with the ball, has a good range of passing and, over the past few months, has risen to the challenge of pushing Liverpool forward and has come right into top form.

‘That is the key. You don’t last at Liverpool just by being a top guy.’ 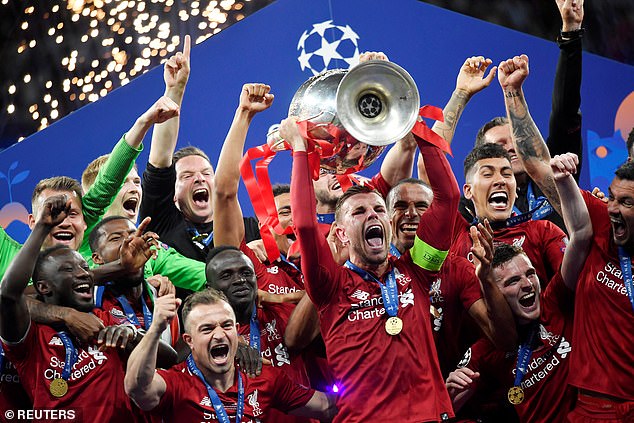 While his dedication and professionalism has never been in doubt, Henderson, 30 in July, has stepped up his output this season, too.

He will never reach Steven Gerrard-standard 20-goal campaigns, but his three strikes in 24 games this season are as many as in his previous three league season combined.

Add to that four assists, 1,484 passes and 53 tackles – the most at Liverpool and 12 more than Andrew Robertson in second – and a picture of the complete midfielder begins to appear.

There is also a level of consistency to his game these days. The 3-1 victory at home to Newcastle on September 14, for which he remained on the bench throughout, is the is the only match he has sat out. There have been 21 Premier League starts and three substitute appearances in 25 games.

For a midfielder who was afflicted by persistent foot injuries between 2015 and 2017, this new lease of fitness has offered plenty of rewards.

There is one person who has been sure never to underestimate his captain.

Jurgen Klopp, who retained Henderson’s services as skipper when he joined in 2015, said earlier this season: ‘If anybody who is with us still doesn’t see the quality of Jordan Henderson, then I cannot help them.

‘Is Hendo the perfect football player? No. Do I know anybody who is? No. But is he unbelievably important to us? Yes.’ 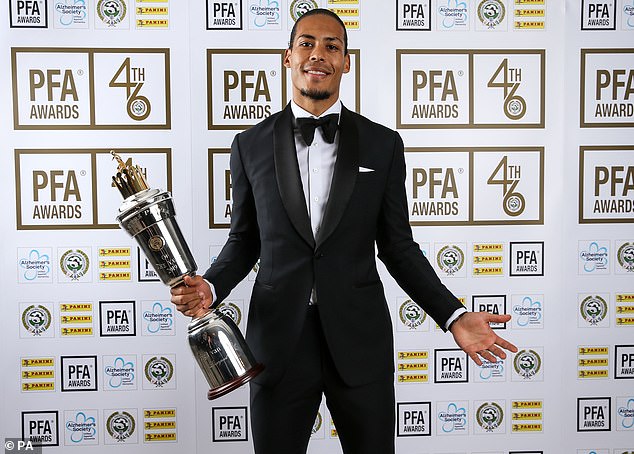 While goalscorers and headline-grabbers are often recipients of the trophy, in recent years there has been more appreciation for other positions across the pitch.

Van Dijk’s towering defensive displays helped sway the voters last year, while N’Golo Kante’s all-action displays in defensive midfield won him the award in 2017 after winning the title with Chelsea.

There have been other such examples, with John Terry the 2005 winner thanks to Chelsea’s miserly defence, while Roy Keane won with Manchester United in 2000.

Even further into history, centre-backs Gary Pallister and Paul McGrath were handed the honour in consecutive years in the early 1990s. 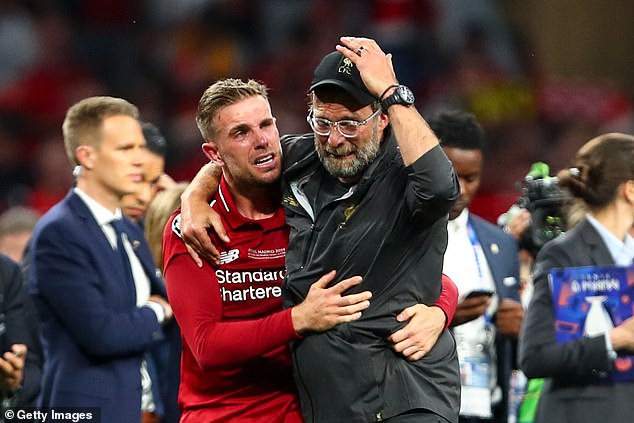 Many will claim Henderson has not even been the best player in his own team this season, and that would perhaps be a fair assessment.

Van Dijk has been as excellent as ever but not perhaps been as revelatory as last season while Mane’s influence is only growing. Salah is not perhaps quite as ruthless as he has been in campaigns past. It is instead as a collective that this team really shines, and that makes Henderson the fitting recipient.

Jamie Vardy’s excellent start to the campaign has tailed off a little, in part due to injury, while nobody at Manchester City can truly believe they deserve recognition after a turbulent season.

Yet it is Henderson who has led consistently and brilliantly from the centre, and occasionally the right, for this team – a goal and an assist sparked Liverpool into life after a stodgy first half against Southampton, providing inspiration just as he has done on countless occasions over the past nine years. 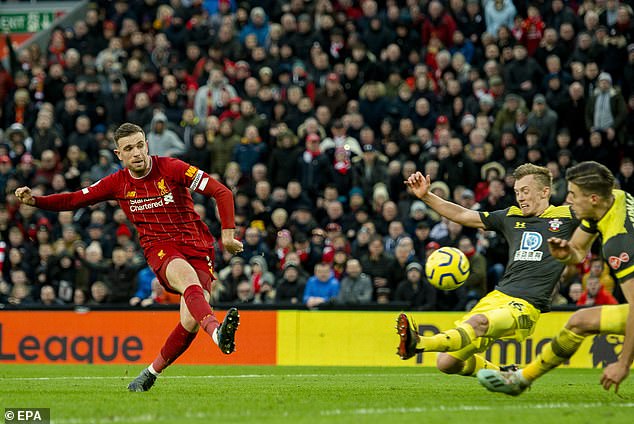 After the win over Saints, Klopp said of his captain: ‘That he scored the goal is incredible and just another sign for his outstanding shape in the moment.

‘He played an unbelievable game again in a difficult game where he is really shouting at everybody, pretty much keeping everybody on their toes.

‘It is not about shouting, it is about what you say. He only asks for things he expects from himself as well, it is not ‘run for me’ or ‘do this or do that’ it is just good.

‘We could not be in this situation without these kind of characters.’

Ahead of the Club World Cup final, in which Henderson would lift his second trophy as Liverpool skipper, Flamengo boss Jorge Jesus said. ‘Henderson is the best midfielder in the world in his position, [Jurgen Klopp] never drops him, but the two offensive midfielders, [Naby] Keita and [Georginio] Wijnaldum, sometimes are replaced.

‘The other players are always the same.’

Former footballers have also been lining up to praise the once-unfashionable workhorse, with Steve McManaman even drawing comparisons with PFA POTY rival De Bruyne. 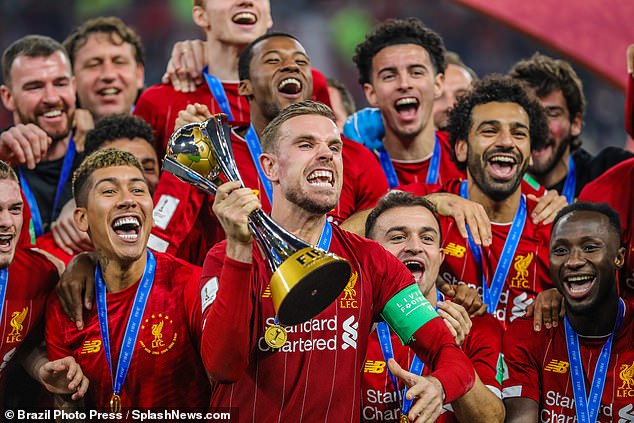 PFA PLAYER OF THE YEAR WINNERS SINCE 2000

McManaman wrote in his HorseRacing.net column: ‘As an ex-footballer and as someone who watches a lot of the games and watching from the stands where you can see the full picture, I really appreciate what Henderson does. I think he’s a superb player.

‘He’s gone to another level since Jurgen has taken over. He’s played in numerous positions and at one stage against the likes of Chelsea and Tottenham he was getting down the right flank and putting crosses in, slightly like Kevin De Bruyne.

‘Now I’m not saying he is Kevin De Bruyne, but the way he starts on the right and whips crosses in, he’s adding things to his game all the time and that speaks absolute volumes for him.’

In an era when physical and tactical demands have reached stratospheric levels, Henderson has stood up to each one.

He transitions, often within one game, from ball-winning disruptor to high-energy creator with ease – even to composed ball-playing centre-half during the Club World Cup semi-final – and proved that neither he nor his team are at any disadvantage when he does so.

The loss of Fabinho to injury earlier this season merely enabled Henderson to demonstrate his supreme command of the No 6 position once again.

His goalscoring return to the No 8 role has then in turn shown the threat he carries when more advanced.

Technically, too, he has proved he can compete with the best. From measured 50-yard passes to the trademark right-wing whipped crosses, there is an understated potency to Henderson’s attacking game.

The misguided idea he is a sideways passer has long been discredited, but if you want further proof: this year he has produced 96 accurate long balls and 49 crosses at an 18 per cent success rate. De Bruyne has just the 74 accurate long balls to his name. 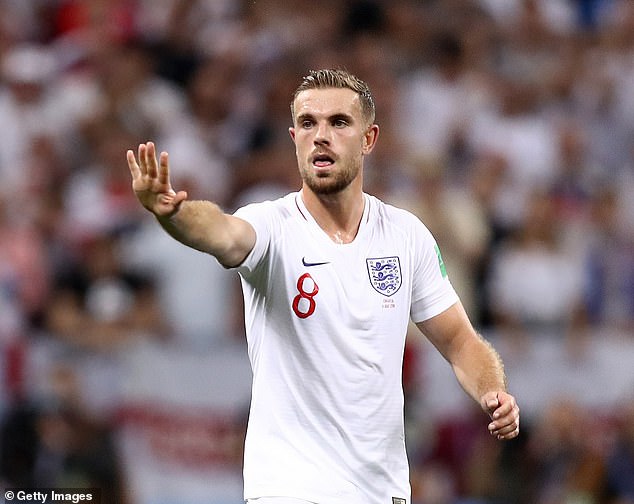 Henderson’s role with England has evolved too. Overlooked for the captaincy in favour of Harry Kane in 2018, he is still a vital influence on an emerging crop of precocious young talents. With 55 caps he is behind only Raheem Sterling in terms of international experience in the current squad.

Many mocked the idea that Henderson could lead Liverpool to the Champions League trophy. Then he did it.

They mocked the idea he could lead them to the Premier League title. Now he will do just that, too.

Should anyone be brave enough to mock the idea he could finally be due some much-deserved individual recognition, there will surely only be one outcome.