By Jack Newman For Mailonline

Dayot Upamecano says he has always dreamed of a move to the Premier League amid rumoured interest from a number of top European clubs.

The RB Leipzig defender, 21, is the subject of intense speculation linking him with a move away from Germany, with Tottenham and Arsenal competing with Barcelona and Bayern Munich for his signature.

But according to German newspaper Bild, as quoted in The Sun, the Premier League would be his ‘dream destination’.

The Frenchman has 18 months left on his current deal in Germany and he has reportedly resisted attempts to tie him down to a long term deal.

The highly-sought after centre back has a £50million release clause in his current contract.

Upamecano has made 17 league appearances this season and five in the Champions League for Leipzig, becoming a regular since he signed from Red Bull Salzburg in 2017.

Bayern have requested to be informed should another club make an approach and it appears a number of clubs are vying for his signature. 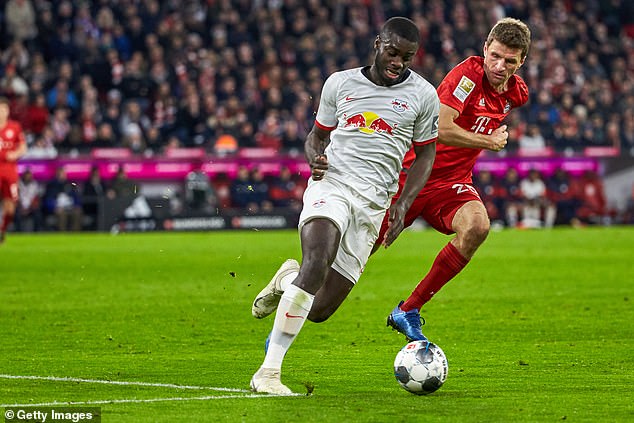 The German champions had a better look at the hot prospect on Sunday during a 0-0 draw against Leipzig, with Upamecano impressing again as he helped keep a clean sheet.

Jose Mourinho was also in the stands, scouting RB Leipzig ahead of their upcoming Champions League clash, but he also will have kept an eye on Upamecano’s performance.

Jan Vertonghen’s contract is set to expire in the summer, leaving Spurs even shorter of defensive reinforcements.