Bundesliga leaders RB Leipzig slumped to a shock 2-0 defeat by mid-table Eintracht Frankfurt on Saturday, ending a 13-match unbeaten run in all competitions despite dominating the match.

Almamy Toure put hosts Frankfurt ahead three minutes after the break with a stunning strike from the edge of the penalty area and Filip Kostic sealed the win in stoppage time.

Leipzig, whose last defeat was by Freiburg on Oct. 26, had 67% of possession and 22 shots to Frankfurt’s seven but still failed to score in a Bundesliga match for the first time this season.

Leipzig, who have 40 points from 19 games, had their lead cut to two points by Borussia Moenchengladbach, who came from behind to beat Mainz 05 3-1. Bayern Munich, who are third with 36 points, are at home to fifth-places Schalke 04 in the evening game.

Timo Werner nearly gave Leipzig an eighth-minute lead at the Waldstadion and it looked only a matter of time before the visitors would break through as Christopher Nkunku and Marcel Sabitzer repeatedly carved open the home defence.

Instead, Frankfurt went ahead almost straight after the restart as a Leipzig clearance landed at the feet of Toure who rifled a volley into the top corner to claim his first goal since his move from AS Monaco at the start of the season. 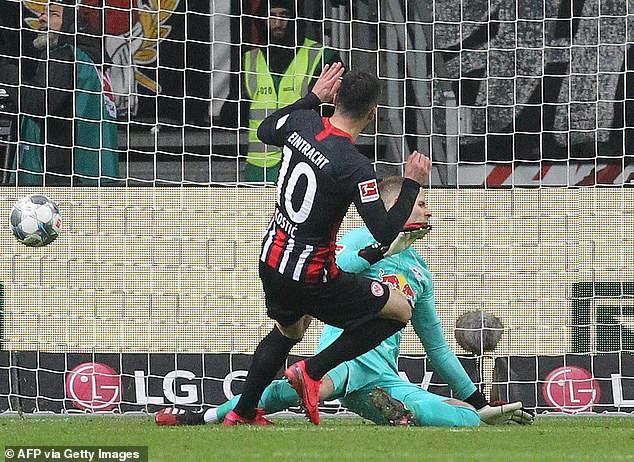 Leipzig regained their dominance and again controlled most of the second half but were unable to find the finishing touch. They were caught out in stoppage time when Goncalo Paciencia got away on the left and laid the ball off for Kostic to tap in the second.

Moenchengladbach fell behind at home to Mainz to a 12th minute Robin Quaison goal but the Foals turned the game around with two goals from Alassane Plea before Florian Neuhaus added a third.

Seventh-placed Freiburg went down to a shock 2-0 home defeat by relegation-threatened Paderborn, who played the last half hour with 10 men after Jamilu Collins was sent off for a second bookable offence. 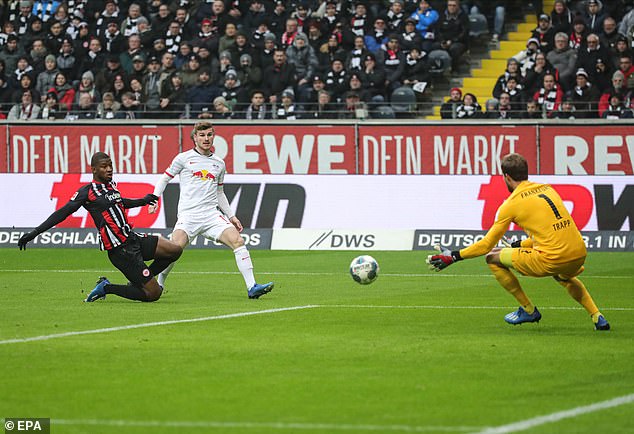 Paderborn took the lead after the restart when they won possession in midfield and released Christopher Antwi-Adjei who outpaced his marker to score. Abdelhamid Sabiri wrapped up the win at the Black Forest stadium with a penalty six minutes from time.

Jordan Torunarigha and Dodi Lukebakio scored in the last 15 minutes to give Hertha Berlin a 2-1 win at VfL Wolfsburg, who had taken the lead through Admir Mehmedi in the 68th minute.