Raphael Varane filled Sergio Ramos’ shoes for Real Madrid, scoring a header and being heavily involved in another goal in the captain’s absence, as Zinedine Zidane’s team won 3-0 away at Getafe.

With Ramos suspended, Varane took over responsibilities bossing the Madrid defence and twice getting forward to contribute to goals with headers.

Luka Modric added a spectacular third in injury time. His finish was simple enough but it came from a brilliant pass on the turn from Gareth Bale and a lightning sprint from substitute Fede Valverde. 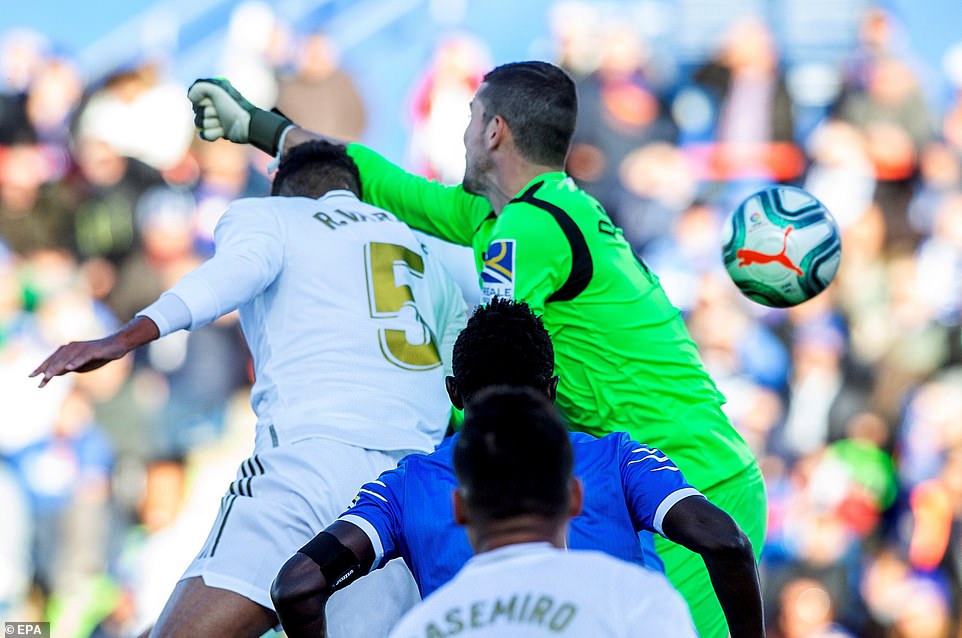 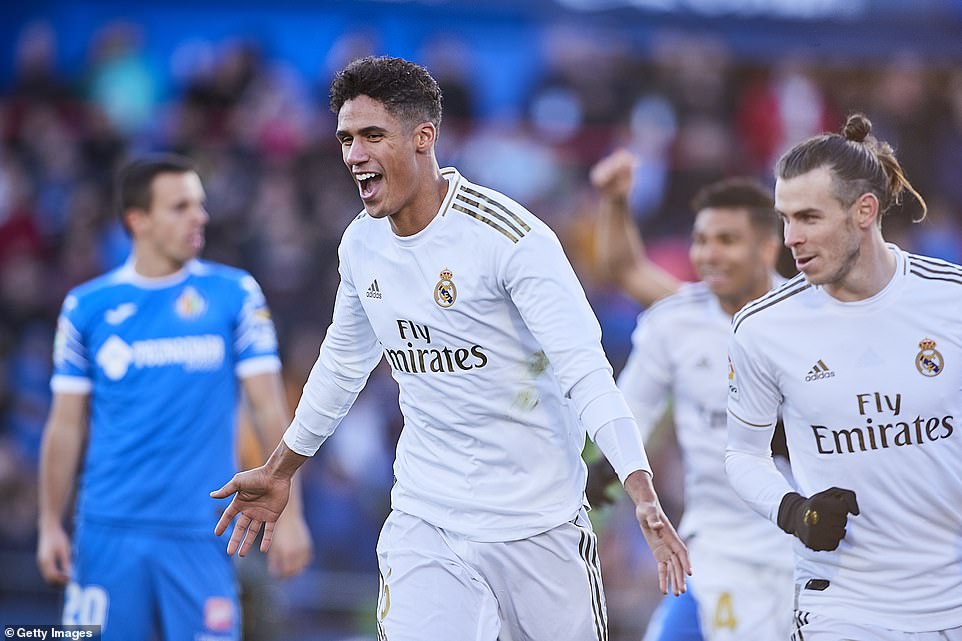 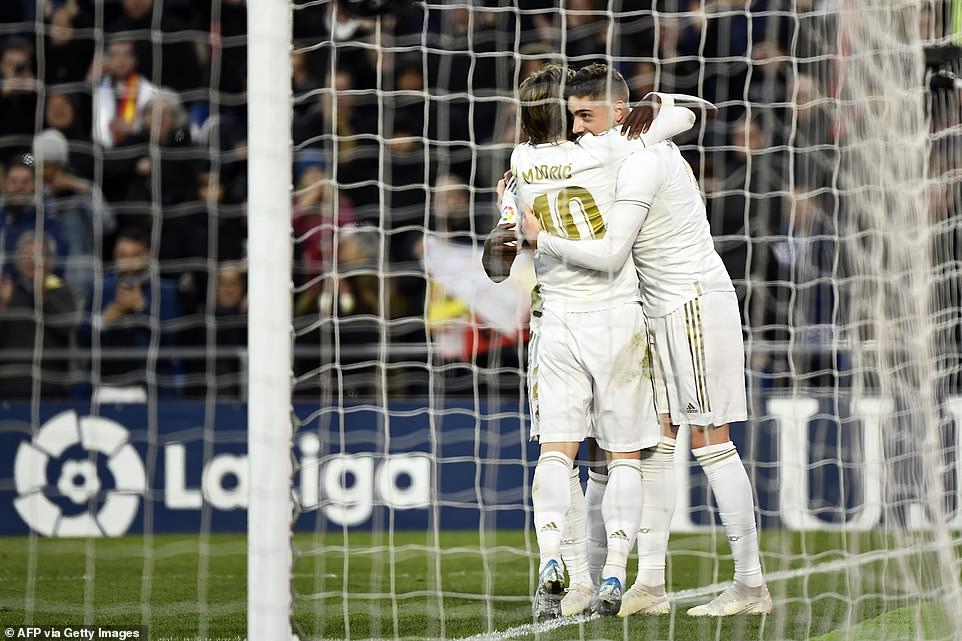 The first goal came from a foul on Bale, who had to hurdle Allan Nyom’s dangerous challenge. The former Watford defender was booked and Real Madrid had a free-kick down by the corner flag.

Toni Kroos’ set-piece came back out to Ferland Mendy on the other side of the pitch. When the left-back crossed, Varane made the most of David Soria having charged off his line to try, and fail, to punch clear, and the Getafe goalkeeper consequently saw the cross come off his arm and trickle into the net to put Madrid into the lead.

It was slightly against the run of play. Madrid were only still on level terms because Thibaut Courtois had dived to push away a swerving shot from the edge of the area from Mauro Arambarri.

But the goal riled Getafe and when Angel Rodriguez brought down Militao, Damian Suarez complained enough to earn himself a booking. Madrid were keeping their heads while Getafe were losing theirs and Karim Benzema might have made it two but for Soria’s save.

Madrid still needed Courtois to help them go in ahead at the break. First he got down well to his left to parry Faycal Fajr’s vicious shot out for a corner and then he saved well from Leandro Cabrera’s header. 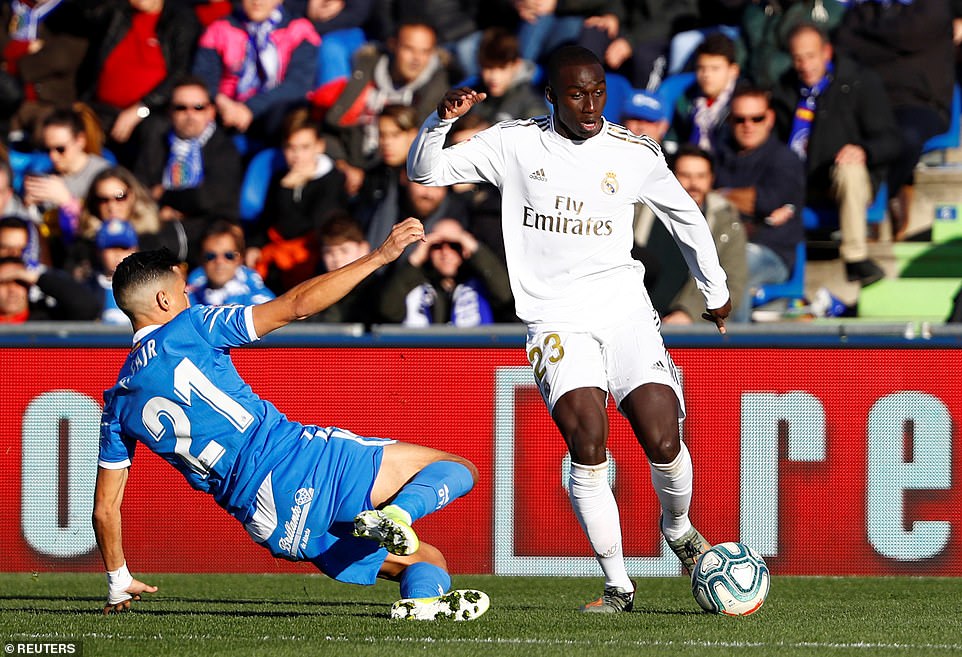 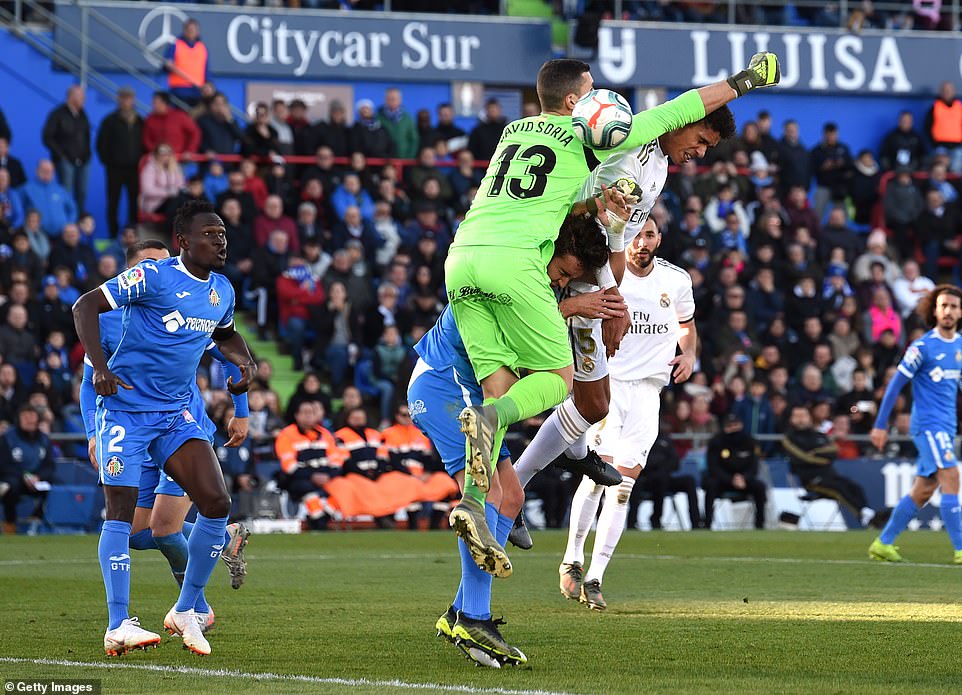 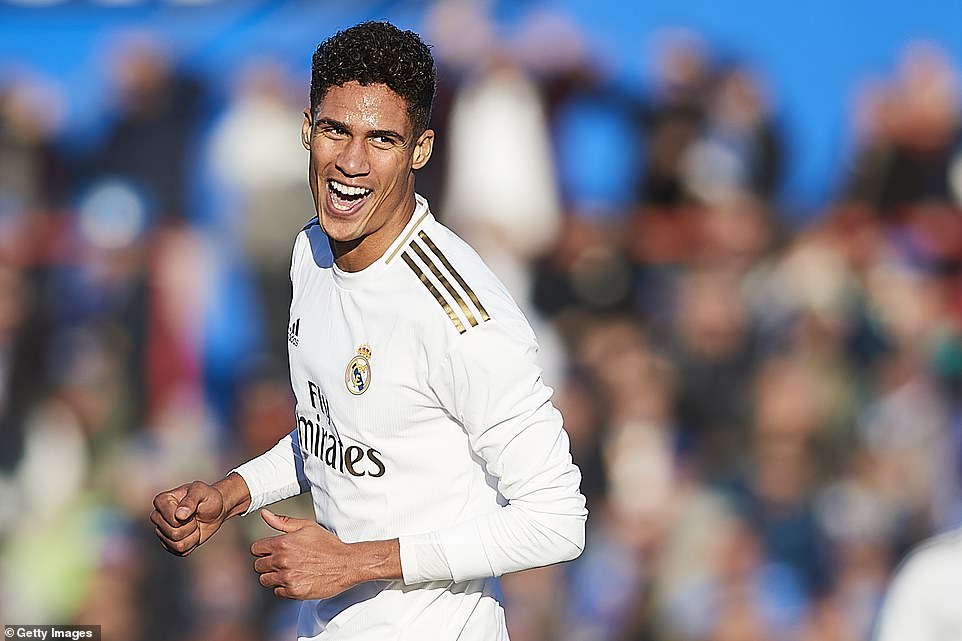 Varane doubled the lead on 53 minutes and if there was some doubt as to whether he got the last touch on the first goal this time it was definitely the defender who converted for Madrid.

Kroos provided one of his registered-delivery centres and Varane signed for it powering his header past Soria. After several minutes of VAR deliberation as to whether he was onside, the goal was given.

Bale might have made it three when he raced clear and tried to chip the ball over the head of the advancing Soria only for the Getafe keeper to reach the lofted effort and swipe it away to safety. 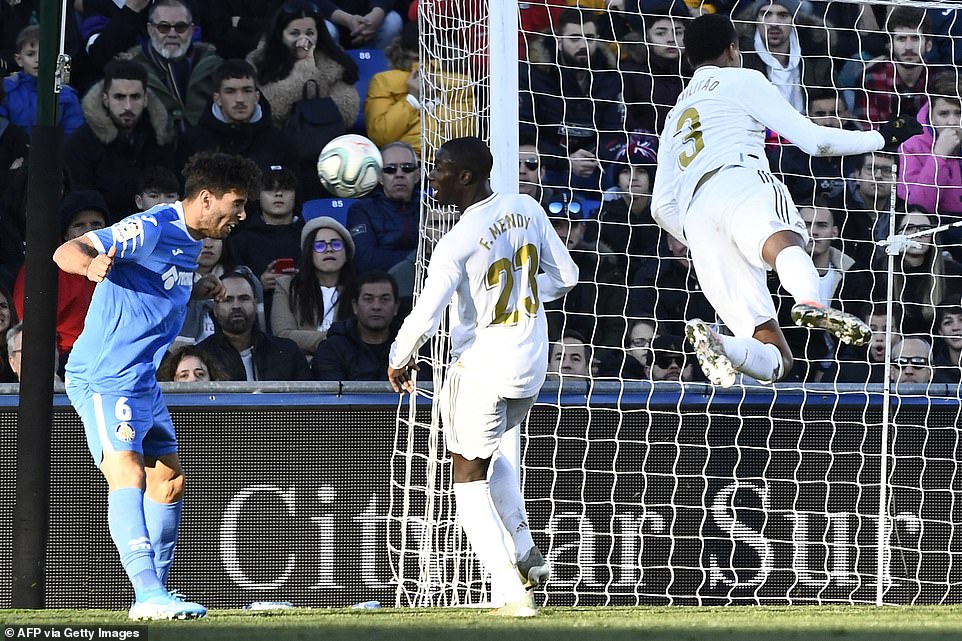 Thibaut Courtois made some outstanding saves, including from Getafe’s Leandro Cabrera, to preserve Madrid’s lead 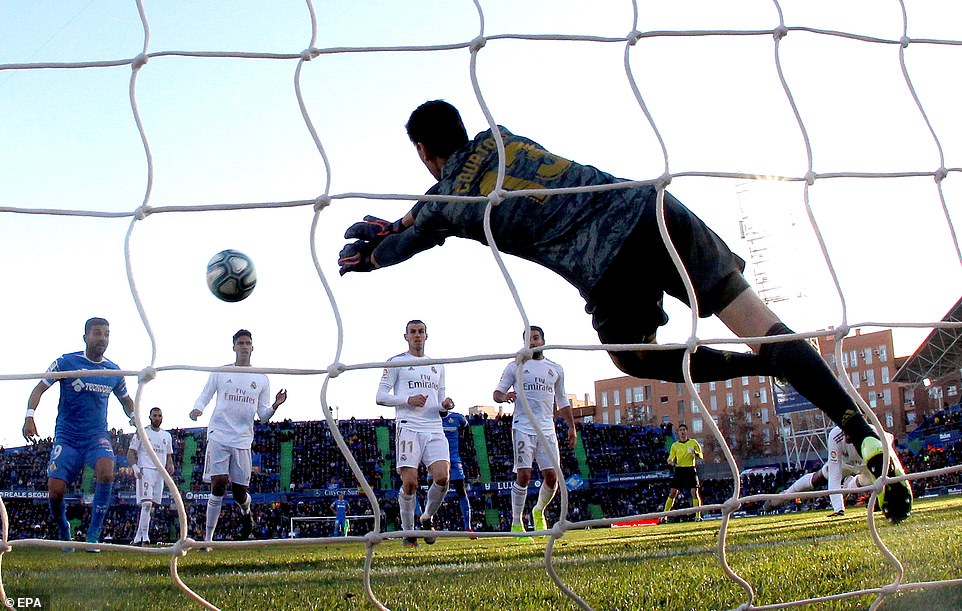 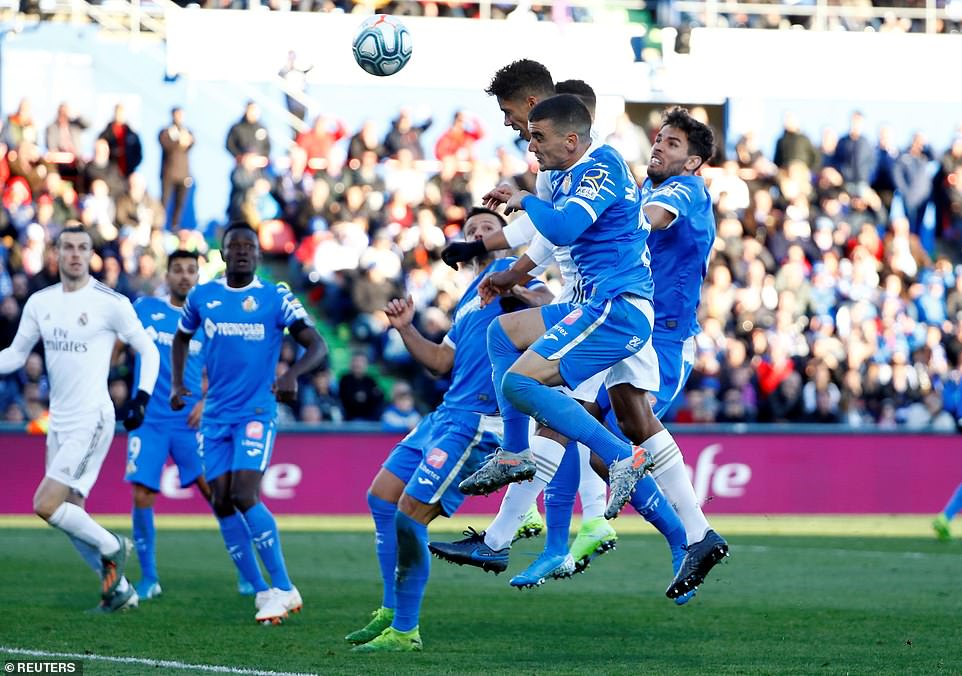 Courtois still had to get down smartly to save from Angel at close range as Getafe fought to the final whistle. Zidane brought on Luka Jovic with 10 minutes left but the luckless forward’s first intervention brought him a yellow card for a foul on Damian Suarez.

Soria denied Bale once more this time blocking at the forward’s feet as he went through on goal running on to substitute Valverde’s pass.

It didn’t matter because Valverde ran on to Bale’s pass and teed up Modric, who was stumbling as he scored to make it 3-0.

Madrid moved top of the table ahead of Barcelona’s visit to Espanyol later on Saturday night. What will matter more to them is that they had dealt with potentially one of the hardest away games of the season with consummate ease. 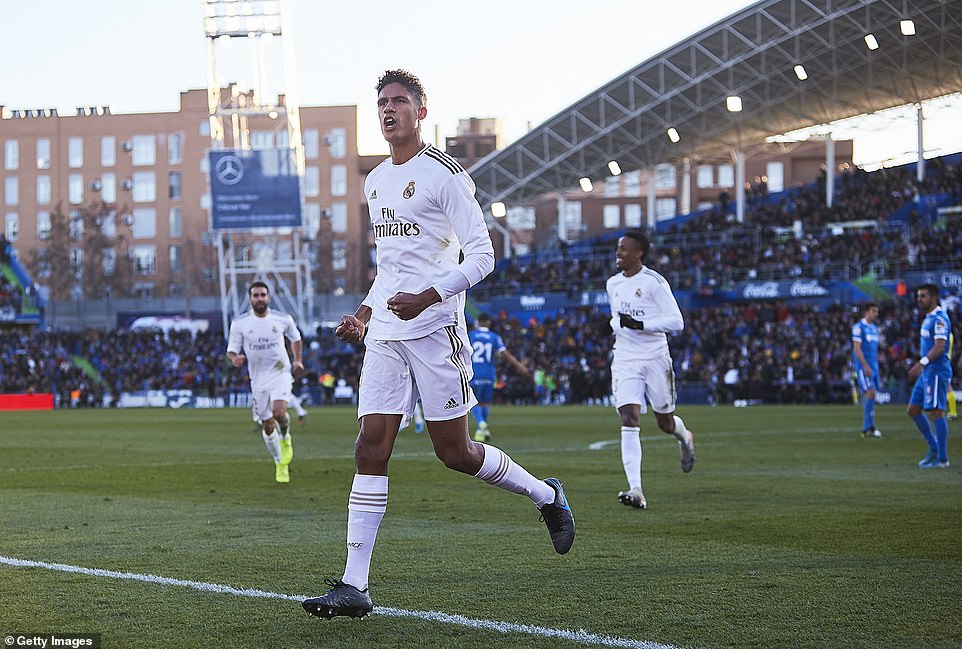 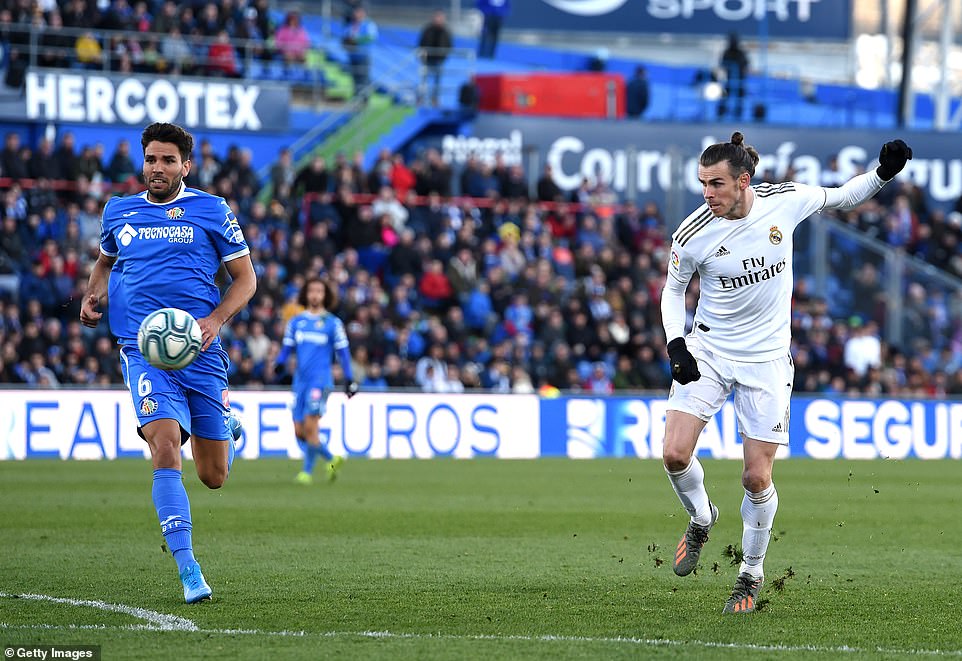 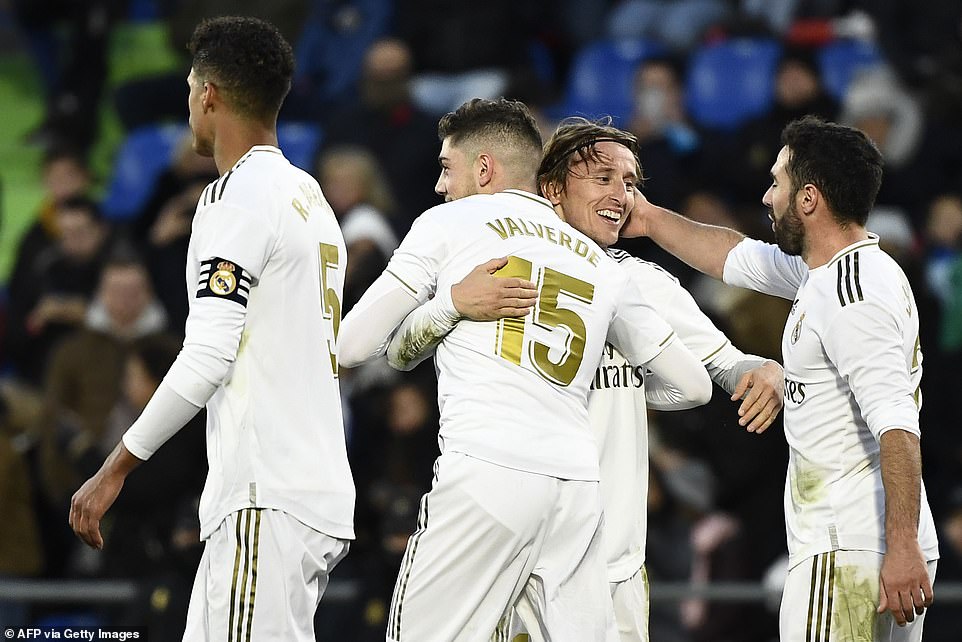